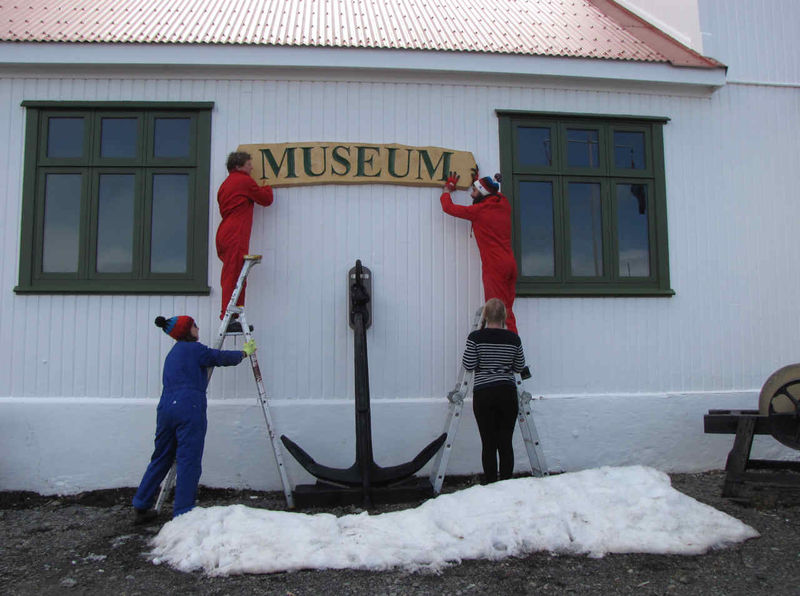 A CRISP START TO THE SEASON

L to R: Caitlin, Pat, Jayne and Hannah ready to raise the flags at the start of the 2019-20 season

It is already well into to November as we upload the first museum blog of a new season, but we have been so busy that this has been the first opportunity to let you know that we are back on the island and operational once more.

We (Sarah, Jayne, Hannah and Caitlin) reached Grytviken on October 11th, having travelled down via the Falkland Islands. There was a special South Georgia exhibition on at the FI Museum, so it was a thrill to see some more of our recent Artist in Residence, Theo Crutchley-Mack’s, artworks. Another part of the exhibition highlighted some of the women with strong associations with both the Falklands and South Georgia. We even went out for lunch with one of the women featured; Jan Cheek, who spent some of her childhood on the island. She is now one of the Trustees of the South Georgia Heritage Trust.

It was still convincingly wintry when we arrived at South Georgia. Deep snow met the sea edge and the local enthusiastic skiers and snowboarders often passed the staff house as they headed into the hills. We had to dig our way into some of the buildings, but the snow can be a help too. It is easier to use sledges to move the big heavy interpretive signs than to use wheelbarrows. We have to wait for the big snowdrifts that form below the museum roof to melt enough to be able to put the big ‘Museum’ sign up (in November).

One new challenge was the installation of a smart looking Electronic Point of Sale stock control system, known for short as EPOS, in the gift shop. Luckily we have tech-savvy Patrick with us for a while to help with this. Another early installation was the bespoke and huge map of the island that will be at the centre of a new Expeditions display in the Bonner Room, the front hall of the Museum. During the closed season we were contacting members of some of the more modern expeditions featured in the exhibition to solicit donations of items or equipment used on the trips. We hope they may include kayak paddles, climbing and ski gear, which will join other artefacts relating to some of the earlier expeditions that are already in the collection, such as the crampons used on the first ascent of the island’s highest mountain, Mt Paget. With things coming from either end of the world, we will be adding items to the exhibition as the season progresses and have hope to have it finished by the end of the summer.

The first cruise ship, Ushuaia, came through on the 20th, but we had already had a couple of charter yachts before that. Aboard Ushuaia was Emile Shemilt of the University of Dundee’s Centre for Remote Environments. Emile was coming to familiarise himself with the space in the upper storey of the Main Store which may in future be used to house an Innovation Centre showcasing art and science.

A historic visit was the last ever visit of HMS Clyde towards the end of October. She has been a regular visitor during her 12-year period as patrol ship in the South Atlantic.

One line per person; the month’s crisp and chocolate ration

We are often asked by visitors what we do for food and supplies. Well we order in everything we need for the museum and staff accommodation and it all arrives at the start of the season. Luckily this does not include food which is done through the logistical support provided by the British Antarctic Survey for the Government of South Georgia. We just go and help ourselves from the food stores and freezers at KEP. But two things are rationed…crisps and chocolate. The delivery of the supply at the start of each month is always a highlight.

Next month – the last member of the core team (Jerome) arrives, and the cruise ships start in earnest on what will be another record breaking year for tourism on South Georgia.