‘Ah me: the years that have gone since in the pride of young manhood I first went forth to the fight. I grow old and tired but must always lead on.’

The constant setbacks and difficulties seemed to take their toll on Shackleton both physically and mentally. Members of the expedition noted their concerns for him in their diaries. On 17 December 1921 in Rio, Macklin the doctor was called for as Shackleton “felt a slight faintness”. On 2 January Quest passed her first iceberg, Shackleton wrote in his diary, ‘Ah me: the years that have gone since in the pride of young manhood I first went forth to the fight. I grow old and tired but must always lead on.’

For seven of the crew who had sailed on Endurance, Quest‘s landfall was the first they had seen of South Georgia, its magnificent scenery and whaling stations, since they had left for the Weddell Sea eight years earlier. On the evening of Quest’s arrival in Grytviken, Shackleton was full of jokes and announced as they retired that they would celebrate Christmas the next day. Christmas Day had been spent riding a furious storm and they had only eaten bully-beef sandwiches. Tomorrow they could enjoy the tinned ham, turkey and plum puddings donated by Mr and Mrs Rowett.

In the early hours of 5 January Shackleton summoned the expedition’s surgeon Alexander Macklin to his cabin. Moments later Shackleton suffered a fatal heart attack and died. He was 47.

Wild recorded in his diary at 3am,

‘I sat up saying ‘Go on with it, let me have it, straight out!’ Macklin replied, ‘the Boss is dead!’
‘It was a staggering blow.’

It is fitting that Shackleton was in South Georgia when he died.  His final diary reads,

‘A wonderful evening. In the darkening twilight I saw a lone star hover, gem-like above the bay.’

Frank Wild, Shackleton’s closest friend and second-in-command, made arrangements to send the body home to Lady Shackleton. On 18 January Quest set off from South Georgia and continued southwards, leaving Leonard Hussey to accompany Shackleton’s body back to Britain. The body was transported as far as Montevideo aboard the steamer Professor Gruvel. There Hussey received a telegram informing him that Lady Shackleton wished her husband to be buried on South Georgia, the scene of his greatest exploits.

In Montevideo the body lay in state for two weeks and a memorial service was held at Holy Trinity Church.

The coffin was then sent off aboard the cargo vessel Woodville with full military honours and returned to Grytviken in South Georgia.

Back in London a grand service was held at St Paul’s Cathedral on 2 March, attended by representatives of the King and the Dowager Queen Alexandra.

Shackleton was buried on 5 March 1922 at Grytviken. A small ceremony in Grytviken church was presided over by Edward Binnie, the magistrate, and attended by the managers of the five whaling stations and a hundred whalers and sailors who sang their Norwegian funeral hymn.

The coffin, draped in the Union Jack, was carried in procession to the cemetery by six Shetland Island men, preceded by two men carrying black funeral banners in the Norwegian custom.

‘It is just here that he would have chosen to lie, and would have preferred this simple funeral to any procedure carried out with great pomp and ceremony.’    Frank Wild

The grave was marked with a simple wooden cross and hung with wreaths. Shackleton’s body faces South, rather than the traditional East, in recognition of his lifelong Antarctic aspirations.

In Montevideo several bronze wreaths had been cast and placed on the coffin. Hussey later brought them to South Georgia to be laid on the grave. The wreaths are from his majesty King George V and the British people, the Uruguayan Republic and the British residents in Uruguay and the French Maritime Society. Mrs Aaberg, the doctor’s wife and only woman on the island, placed a wreath of flowers grown in her conservatory on the coffin.

‘The graveyard is a simple little place. An ideal resting-place this for the great explorer who felt, more than most men, the glamour of such surroundings.’    Frank Wild

In 1928 a headstone made from Scottish granite was erected on Shackleton’s grave and unveiled at a simple ceremony by the Governor of the Falkland Islands, Sir Arnold Hodson. The headstone was made in Edinburgh and was carved by Stewart McGlashen. It was taken to Barry Docks, Wales, by rail and shipped on Harpon, a cargo ship that sailed regularly to Grytviken.

Shackleton’s love of poetry is reflected in the inscription on the back of the headstone based on a poem by Robert Browning;

‘I hold that a man should strive to the utmost for his life’s set prize’.

After the expedition, Quest was sold to a Norwegian ship-owner, returned to Norway for a re-fit in 1924 and used once again for sealing. The ship also went on to be chartered out for scientific and hunting expeditions in the Arctic. Quest survived World War II, working as a minesweeper, but was eventually sunk by ice in 1962 just north of Newfoundland, Labrador, whilst on a seal-hunting expedition.
The Quest crow’s nest and deckhouse were removed and taken ashore in 1924 following the refit. The crow’s nest became the property of Reverend Philip Clayton of All Hallows by the Tower while the deck house sections were split and used as a summerhouse and sheds. After many years in a shipyard, Shackleton’s cabin was finally rescued and now resides in the Shackleton Museum in Athy. The crow’s nest and the cabin are now all that remains of the ship, the Quest.

Next Chapter: The Quest Continues

Shackleton’s diary written on Quest recalls his last thoughts as the ship approached South Georgia. ‘4 January – At last after 16 days of turmoil and anxiety on a peaceful sunshining day we came to anchor in Grytviken. How familiar the coast seemed as we passed down. We saw with full interest the places we struggled over after the boat journey. Now we must speed all we can but the prospect is not too bright for labour is scarce. The old smell of dead whale permeates everything. It is a strange and curious place. A wonderful evening ‘In the darkening twilight I saw a lone star hover: gem like above the bay’’ 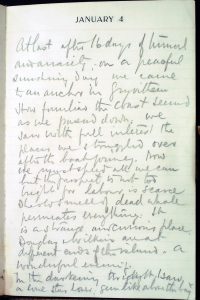 The Quest deck log includes this entry made by Frank Worsley in the early hours of the morning on 5 January 1921. ‘3am. Sir Ernest Shackleton died suddenly of heart failure. Drs Macklin and MacIlroy in attendance.’ 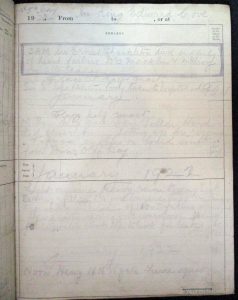 Dell took this Singer sewing machine with him on both the Discovery and Quest expeditions. It was used to make the shroud, made from an old sail, for Ernest Shackleton’s body.

‘The Boss’ Leaves his Ship for the Last Time

Drawing from ‘The Illustrated London News’, March 1922, depicting the body of Sir Ernest Shackleton being taken ashore to Grytviken from the ship Quest. On the morning of 5 January the crew rowed the body ashore to the whaling station hospital. The two expedition doctors, Macklin and McIlroy, examined and embalmed the body. They diagnosed he died of a longstanding heart disease. They laid Shackleton in a plain wooden coffin and carried it to Grytviken church.
South Georgia Museum.2012.31

One of two funeral banners used at the burial of Shackleton. Bearers carrying the unfurled banners walked ahead of the funeral procession from the church to the cemetery at Grytviken.
Length: 196cm
Diameter (widest): 5.5cm
Diameter (narrowest): 3.5cm

Metal funeral plaque inscribed ‘This wreath was laid upon Sir Ernest Shackletons coffin by E J Hope Vere, his Britannic Majesty’s Charge D’Affaires on behalf of his Majesty the King and His Majesty’s Government, Montevideo, February 15 1922’