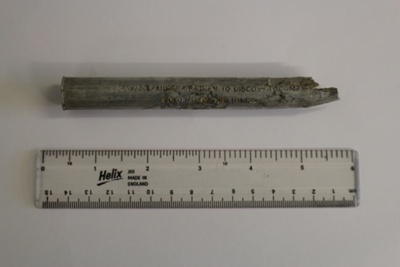 About this objectThis metal cylinder whale mark with end sheared off was fired into a fin whale on 25/1/1935 and recovered 23/11/1963 at Grytviken. At 28 years 8 months and 22 days it is the greatest time recorded between marking and recovery.

Inscription and Marksposition: along side of mark; method: stamped; content: 'REWARD PAID FOR RETURN TO DISCOVERY COMITT[...] / COLONIAL OFFICE LONDON / No 1484'

Each mark was fired into the back of a young whale from a catcher, many of the marks being equipped with coloured silk streamers which showed on the surface, but there was no sign of a streamer or a scar on this whale or we would have seen it. Moreover, the target area for the whale gunner was the same as that of the marker gunner so very often, ass in this case, the mark was badly damaged in the explosion of the harpoon. The system worked well if the mark could be spotted during the flensing operation, gibing the biologists time to make a full collection of specimens, but we all missed it.

When a whale is flensed, the parts are sent to four destinations: the best meat is moved to the clean area at one side of the plan, cut into blocks and transferred to the ship for freezing; the blubber is fed into the blubber cutter to be shredded and fed into a series of boilers in the building behind the Inspector’s Office; the bones are dragged by winches to the bone loft where the large bones and backbone are cut up by steam saws and then dropped into a second set of boilers; finally the offal and sub-standard meat is dragged up onto the meat loft and dragged to the open tops of a third set of boilers. All of the boilers are tightly sealed and steam heated for a day or so, after which the oil is pumped out and the residue is transferred to the driers to be converted into bone meal and meat meal.
This mark was discovered when the meat boiler was being cleared a day after flensing, and it was difficult to determine which of the two large whales it had come from. The flensing process was rather complicated when there were several whales on the same day, and there were sixteen whales on 22/23 November, one of the busiest days in the season. The priority was to flense the freshest whales first to give priority to meat in good condition, so those which had been towed for great distances would often be left until later.
I was working on the plan when the Plan Foreman, Mr Ichizaka, came up with an excited worker carrying the whale mark in his hand. I took all his details and immediately followed him back to the meat boilers to see if there were any more fragments, I don’t think I could read the number on the mark at that time. The area of the meat boilers was like a vision from hell: you walked in very dim light through two lines of hot boilers, taking care not to trip on the railway tracks. Most of the boilers were still operating, with the jackets full of pressurised steam, and I was led to the recently opened one. There were still whales on the plan so the three workers were in a hurry to clear and refill the boiler. Each worker as ever in neat overalls, held a pole with a rake-like fork on the end and they were clawing the hot meat off the walls and transferring it to one of the trucks to be taken to thre drier. I attempted to get into the boiler and look around for the remains of the mark, but I could only stand the heat for a few seconds, it was a miracle that the mark had been spotted at all.
The worker, and Mr Ichizaka put their heads together to work out when the boiler had been loaded and which whale the meat had come from. It would have been an easy calculation had we not had the two large whales in more or less consecutively, but they came to a conclusion and we accepted it.
I duly filled in the Discovery Form and sent it off with the details of the whale mark. I sent off my only copy so I was left with no record of the name of the sharp-eyed worker.

This mark, of which only about half remains, was fired into a young female fin whale on Jan 25th 1935 from the whaling ship ‘Skua’ about 75 miles west of Willis Island, South Georgia (Lat. 54° 06” S, Long. 40° 23” W).
The Japanese whale catcher 10 Kyo Maru shot the whale on 23rd November 1963, about 150 miles south of the original marking location, and towed it to Grytviken Whaling Station, South Georgia.
The mark was not seen during the flensing operation and was discovered during the meat processing operation and assigned to one particular whale flensed earlier. Its damaged condition indicates that it was close to the point of impact of the explosive harpoon. Regrettably, I cannot find the record of the name of the man who found the mark, I can only recall that he came from Aomori Prefecture.
This mark was recovered 28 years 8 months and 22 days after it was fired into the whale. This is the greatest time ever recorded between marking and recovery of a whale maker and was the first solid proof that fin whales can live over 28 years.

In addition to the above mark, a further mar was recovered at Grytviken in November 1963. This was a Russian Mark No 980 found in a young female Fin Whale shot on 29th October 1963 at 13.55 hrs by No 10 Kyo Maru at 52deg14min south, 32deg 24min West. The whale was 68ft long and a collection of Baleen Plates, tympanic bulla and earplug was saved. I have no date as to when and where the whale was marked.