‘I am no good at anything but being away in the wilds with just men. I feel of no use to anyone unless I am outfacing the storm in wild lands.’
Sir Ernest Shackleton

Following the end of World War I Shackleton was restless. He told his wife Emily, ‘I am no good at anything but being away in the wilds with just men. I feel of no use to anyone unless I am outfacing the storm in wild lands.’

He started planning another polar expedition. The endeavour was underwritten by his friend John Quiller Rowett and so was named the Shackleton-Rowett Antarctic Expedition. The expedition plan was ambitious but some of its aims were somewhat vague. They included charting the missing gaps in the coastline of the Antarctic continent and surveying forgotten or little-known islands in the Southern Hemisphere, in particular the South Pacific. Further aims were planned which would bring economic benefit, such as geological investigations and a search for whaling and sealing grounds.

On 17 September 1921, Quest sailed from St Katharine Docks, London. The departure drew large crowds, who waved from the banks and bridges
of the River Thames.

‘It was as though all London had conspired together to bid us a heartening farewell.’   James Marr 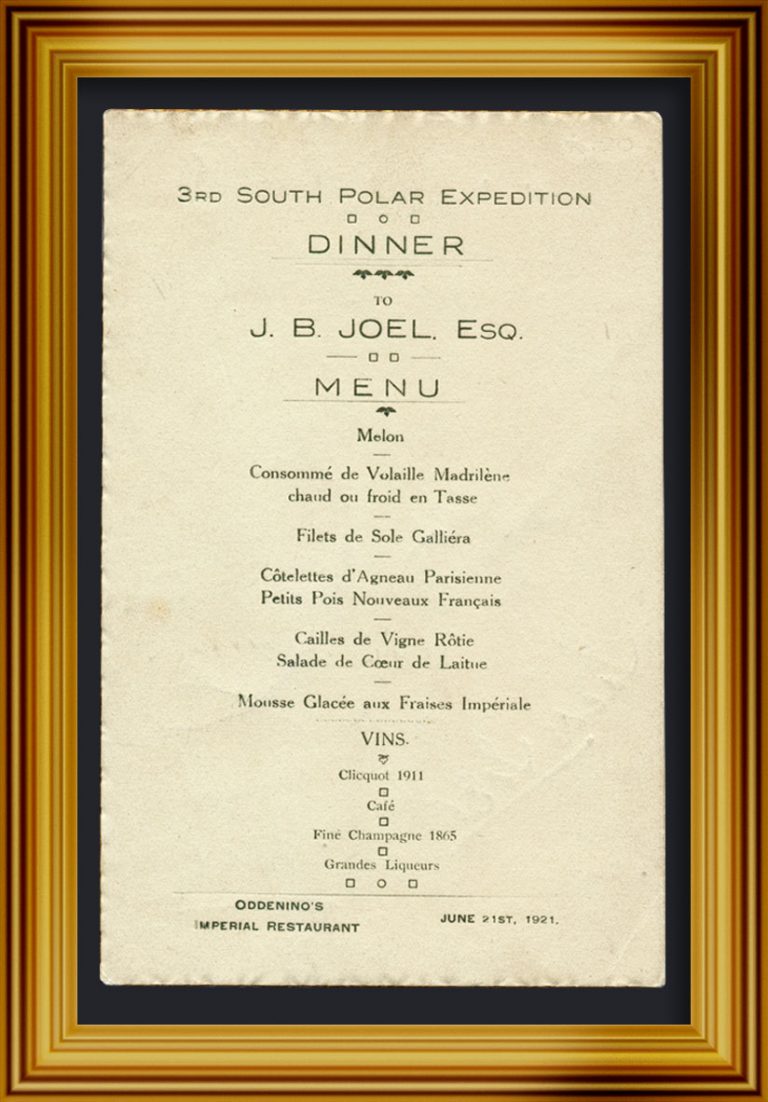 Menu from a dinner to raise funds for the expedition, with signatures of the crew signed on the back
Image ©Dundee Heritage Trust

The expedition was organised in only three months in the hope of catching the 1921 season. Once launched it quickly became clear that having a vessel with a top speed of only five knots and ill-equipped for such a voyage, the start to the expedition would be slow.

They were struck by mechanical difficulties and bad weather from the start. Shackleton had to re-route several times for repairs; there was a four-week stop for an engine overhaul at Rio de Janeiro. The decision was made to omit the planned visit to Cape Town to pick up winter stores and polar clothing and instead proceed directly to South Georgia.

This leg of the journey proved treacherous but on 4 January 1922, after contending with a leaking boiler and a ferocious four-day storm, Quest finally reached the shelter of Grytviken and the company of the whalers.

Next Chapter: The Ship

Menu from a dinner to raise funds for the expedition

Menu for a dinner on at Oddenino’s Imperial Restaurant, London on 21 June 1921 to raise funds for the Quest Expedition

Signatures on the reverse of the menu for the fundraising dinner