Read the team blogs on the Latest News Page: 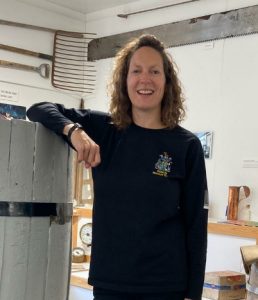 Curator Jayne Pierce is a very experienced Museum Curator. She
graduated from Leicester University with a BSc Honours degree in Geology
before completing an MSc in Micropalaeontology at University College
London. After a spate of travelling and exploring gold mining in Western
Australia, she returned to the UK to follow a career in museums, first
as Curator of the BP Collection at the Natural History Museum. Later,
having secured the role of Assistant Curator of the Geology Collections
with UCL Museums & Collections, Jayne progressed through a number of
positions at UCL before being promoted to Head of Collections
Management. Passionate about outdoor pursuits and geology and hiking and
exploring the UK national parks, Jayne developed an appetite for
travelling which let to hiking the Himalayas of Nepal, the Rocky
Mountains of Canada, the volcanoes of New Zealand and Bolivia and now
working in South Georgia.
Jayne enjoys visiting and exploring all aspects of culture and heritage,
from art galleries to museums, architecture and gardens. 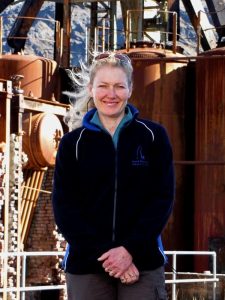 Sarah Lurcock Sarah Lurcock is responsible for overseeing SGHT operations on South Georgia including the operation and management of the Museum. Sarah studied biology at university and has lived and worked on South Georgia, in various roles for more than 20 years. In this time she has developed an in-depth knowledge of the island’s heritage and natural history and been involved in a variety of projects including the refurbishment of the whalers’ cemeteries and Grytviken Church; scientific fieldwork, and the translocation of reindeer to the Falkland Islands. Sarah has a particular interest in the social history of South Georgia and general history of the Antarctic region. 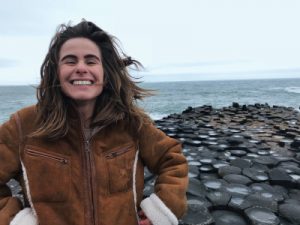 Maddi Kuras is the South Georgia Heritage Trust’s Curatorial Assistant for the 2021-2022 season, whose interest in all things polar is at odds with her childhood in the deserts of Australia. After trading the blistering heat for snowy north of Maine, Maddi studied polar science and biology at Bowdoin College, where she could be found either in the marine laboratory exploring what makes sea stars “bounce” or pouring over old journals from Robert Peary’s polar expeditions.

Maddi’s love of science communication has taken her into the halls of various science museums in New York City, including the Climate Museum and American Museum of Natural History. There, she worked on programming events and exhibitions that helped to communicate climate change to different audiences, while using community engagement to find affirming solutions for global problems. 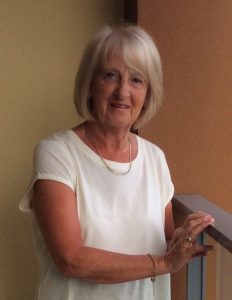 Liz Adams Liz Adams is the buyer for the Museum gift shop and works from England. Her main goal is to increase the profitability of the shop and to make it an attractive gift shop for visitors to the island. Liz concentrates on sourcing unique high quality gifts that are environmentally friendly and produced ethically. 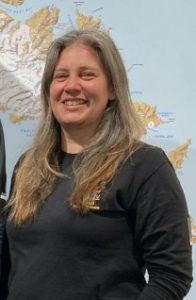 Senior Museum Assistant Vicky Inglis is originally from northeast Scotland, though work and travels have taken her around the world, from northernmost Norway to the Antarctic Peninsula. After graduating with a degree in marine biology from Stirling University and a master’s degree in environmental management for tourism and recreation from Napier University, she worked for several years in roles focused on environmental education, outdoor leadership, and conservation science communication.

Vicky is a keen sailor and has crossed the Atlantic under sail twice (once on a Viking longship), and enjoys hiking, camping, and skiing in the mountains near her home in the Cairngorms. She is an enthusiastic birdwatcher and wildlife watcher. Her interest in the polar regions was sparked by a school trip to RRS Discovery in Dundee, as well as studying the remarkable wildlife of the region.

Vicky worked in Antarctica for the UK Antarctic Heritage Trust during the 2019/20 season, running the historic British base at Port Lockroy (also known as the Penguin Post Office) and monitoring the Gentoo Penguin colony, before returning to Scotland. After two seasons working as a Ranger in the Cairngorms National Park in Scotland, Vicky is thrilled to be at South Georgia working for SGHT and support the important work of the Trust. 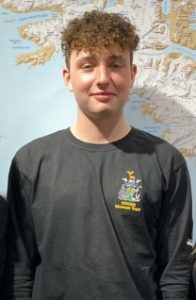 Museum Assistant Connor McLeod was born and raised in the Falkland Islands. At the age of 16 he travelled to the UK to complete further education at Peter Symonds sixth form college in Winchester, where he studied Geography, Biology and Environmental Science.

In 2019 he spent two weeks living on board the Rio Amazona, a boat built in Scotland in 1899, moored on the Yarapa River, participating in multiple surveys and attending many lectures. The expedition was associated with the group Operation Wallacea, a British biodiversity research organisation and volunteer tourism operator.

Now on a gap year before returning to the UK for university, he finds himself once again far away from home, captivated by sharp, striking mountains and a diverse range of unique wildlife. 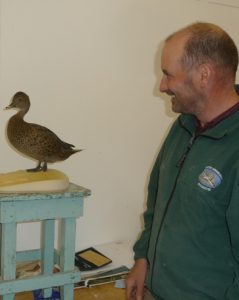 Steve Massam Steve Massam is the Museum Taxidermist. He is based in the Falkland Islands and has occasionally spent time working at the South Georgia Museum. Steve is also a talented sculptor and has designed an attractive range of goods that are made for sale in the gift shop. He assists with training the museum staff to make the South Georgia Island Craft range.