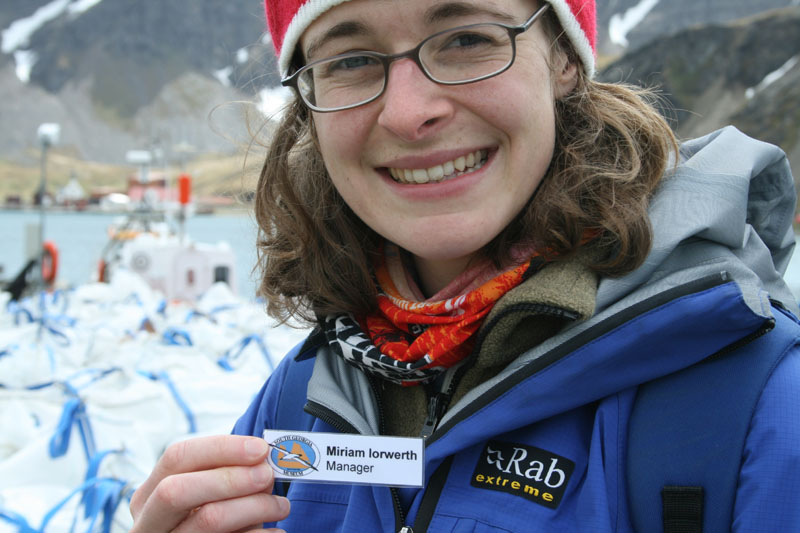 Well time is flying here on South Georgia! We’ve already been here for over a month and have had ten cruise ship visits and seven yachts pop in to say hello. Despite our best efforts, the cake and biscuit production lines aren’t quite up and running yet, maybe next month will be a good time to get the now legendary tea and cakes at the museum.

The biggest and saddest news from the last week has been the loss of Explorer, which sank close to the South Sandwich Islands. We were all glued to the internet news sites and were very relieved when we heard that everyone managed to get off the ship unscathed. Just days before we had been eating a lovely dinner on Explorer with the passengers and arranging Christmas dinner for the museum staff, as the ship was due back in Grytviken on Christmas Day. On a more positive note, we were delighted to see a South Georgia bobble hat (bought in the museum shop) on the BBC news website, as well as some of the happy faces of the people we had met on the ship.

Back to the world of the museum, and things have been very busy. John has been beavering away in the workshop and reappearing with all sorts of magnificent items, including a picnic table that is waiting for its last coat of paint, before a grand unveiling. Sarah’s creative juices have been unleashed in the shop with a big reorganisation to help both customers and staff while the shop is busy with cruise ship passengers. John’s woodworking skills once again came into force with new shelving, and a fantastic new hanging clothes rail (made of various items found in cupboards), which is very ‘South Georgia’. Early indications are very positive, and the flow of people around the shop seems to have improved.

The wildlife continues to amaze and amuse, and I’m particularly partial to the elephant seal weaners. I’m easily distracted on the walk to work by their cute squashed up faces; it’s amazing I make it in at all! The fur seal numbers are starting to increase with one pup being born near the graveyard. Elsa and I also saw two on a walk around Brown Mountain at the weekend, so soon the place will be teaming with them.

We’ve managed to get out and about between ships quite a bit. I went over to the Greene Peninsula for a couple of nights camping to see my partner who is working as part of a British Antarctic Survey field party. Sarah spent a night at Maiviken cave, a place that was used by the sealers as a safe haven, and even has a front door! We’ve also been getting out and about for day walks, including climbing up Brown Mountain, Orca Peak, skis to Maiviken and walks along the beach amongst the furries!

The building contractors, Morrisons, have arrived to work on the hydroelectric dam, so the population of the island has doubled in the last week. Their base is at Grytviken so this side of the cove is a lot busier now, and there is always someone around to have a laugh and a joke with. They have already started work on the new Carr Maritime Gallery, so soon Elsa will be able to start working on the exhibits.

That’s about it for this instalment, so the torch will be handed back to Elsa for next time.