Alert‘s hydrographic survey operations in South Georgia came to an end on April 13 1930. Later that month she was slipped on the Marine Biological Station slip at King Edward Point and lay on a cradle between two boatsheds until sometime in the early 1930s when she was shipped to Stanley in the Falkland Islands, perhaps aboard the Fleurus in 1931, ’32 or ’33, or aboard S.S. Lafonia in 1934. The exact date of her purchase by FIG has not yet been determined but it appears that for the first one or two years in the Falklands, she was employed for hydrographic survey operations in the Port William area between Cape Pembroke and Mengeary Point, and around Wolfe Rock. She worked out of Stanley with a team of surveyors from the Royal Navy. 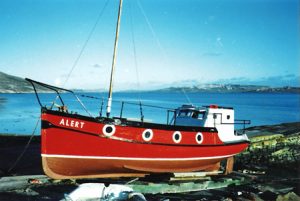 In 1935 or ’36, the Alert entered service as a harbour launch for the FIG Customs and Harbourmaster. Her first local captain was Jack Sollis and her coxwains at various times included Matthew McMullen, Riley Short and Ernie Luxton. She frequently made trips to Port Louis and Johnsons Harbour in Berkeley Sound, carrying passengers and freight between Stanley and the farm settlements.

Jack Solis ran the Alert until 1948. During the Second World War he took her out on nightly patrols between Cape Pembroke and Mengeary Point, and was awarded an BEM (British Empire Medal) for his work in 1946. In 1948, Sollis became captain on the Philomel, a 75 ton motor fishing vessel that carried passengers, mail and freight around the islands. (Philomel was replaced by the Forrest in 1967, of which Jack Sollis was captain until his retirement, he was honoured with an MBE in 1976) the Alert continued her harbour work for FIG.

In 1953, Alert was completely refitted and a new 72 HP Lister diesel engine installed. She then carried out a survey of the entrance to Salvadore Waters under a Royal Naval party from H.M.S. Austell, and throughout the 1950s continued her regular runs to the settlements in Berkeley Sound. At this time she was probably also used during the maintenance of the coastal lights and beacons in the Port William area, these structures being unrepaired since the early 1940s.

In 1970, still in excellent condition, the Alert was slipped in Stanley and remained there until 1972, when she was bought from FIG for private use at Roy Cove. She was rigged with a lug sail which there was never reason to use, her Lister engine still being very reliable. From 1972 to 1977, Alert was used out of Roy Cove as both a pleasure boat, going as far afield as New Island to visit friends, and also for farm work, shifting ram hoggs between Roy Cove and Rabbit Island, and mutton on and off Bense Islands by towing a raft on which the sheep were carried.

In 1980, the Alert was sold and was in use at the Murrell, a farm that was of difficult access overland from Stanley. From 1980 to 1982, she transported goods and passengers to the farm and was also to tow the farm’s wool clip to Stanley. In 1982 the Alert was sold again and was used for transport with the Great Island group in Falkland Sound. Alert next changed hands in May 1984. She was in a poor state, having been hauled up on the beach at Great Island a couple of years previously after going ashore in a gale during which she lost her fake keel. In September that year she was shipped to Fox Bay East, and the in November she was towed from Fox Bay to Port Stephens by Sally and Jerome Poncet with their yacht Damien II. She was slipped immediately, and the owner Michael McRae set about replacing the old diesel engine and keel bolts, laying a new false keel and recaulking all the planking below the water line. In February 1985, the Alert was back in the water once more and despite being underpowered, she performed well in her first sea trials and during the numerous pleasure trips that she did over the next two years with the McRae family.

In 1995, the South Georgia Whaling Museum (now the South Georgia Museum) began work on an exhibit about the Alert and her hydrographic survey operations in South Georgia. At Port Stephens a section of her bow was prepared for transport to Stanley aboard the M.V. Tamar, followed by transhipment to the R.R.S. Bransfield, and thence back to Grytviken in South Georgia in November 1995.