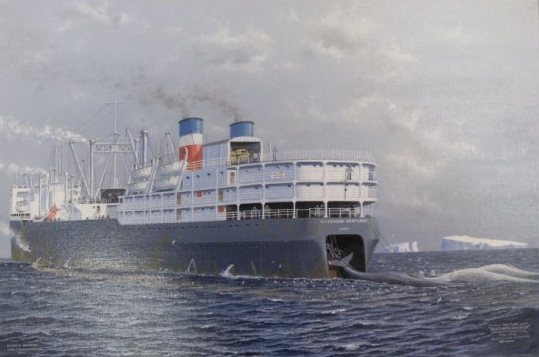 We have recently received an excellent painting of factory ship Southern Venturer. Read all about it!

It’s the end of the season! Read what General Manager Ainslie Wilson has been up to in the last few weeks.

READ ALL ABOUT IT!

New painting of Southern Venturer donated to the collection.

An eagerly awaited parcel arrived at the South Georgia Museum this week – an amazing painting of the factory ship Southern Venturer. The painting was completed by artist and ex-whaler George Cummings last year and he kindly donated the piece to the Museum for display in the Carr Maritime Gallery. A huge thank you must go to George for this excellent donation. 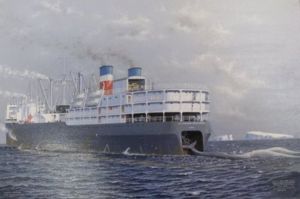 He has been painting marine and Antarctic scenes for many years, many of these paintings depict whaling vessels. Examples of his work can been seen in whaling museums around the world and he previously donated an oil painting of Pesca 2 to the South Georgia Museum in memory of Nigel Bonner.

George is also Chairman of the Salvesen Ex-Whalers Club which is based in Edinburgh. He is currently working with South Georgia Museum on an ex-whalers oral history project to document the remarkable history of whaling on and around the Island. We are extremely grateful for George’s ongoing support of the Museum and the South Georgia Heritage Trust.

The end of the season seems to have come by in a rush, and life on a small island seems to get busier and busier. Saying farewell to the last cruise ship of the season hasn’t meant that life has gone quiet. In the last couple of weeks there has been a RFA and Navy visit which included a football game, a repeat of the marathon, a church service and long opening hours for the shop. With all the museum assistants now back in the UK, it was just me in the shop with Hugh being chief packer, cup of tea maker and general gofer. The Grytviken Marina has also been busy with 4 yachts tied up. Two of these yachts have children on board, so their shouts and laughter has been echoing through the station as they play hide and seek, chasing and hunting for easter eggs. The BAS supply ship Ernest Shackleton returned to SG after a 3 year absence to deliver and take on cargo and once all the work and dentist visits were completed, there was a lot of socialising to be done.

The Habitat Restoration project is one step closer again this week with Tony Martin, project leader and Peter Garden, New Zealand helicopter pilot, visiting the island to make plans for the first trial next season. Hugh meanwhile has not been able to wait for the professionals to get rid of the rats and is on a campaign himself to rid Grytviken of the pesky pests. 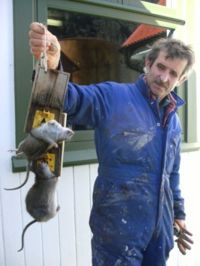 Hugh launches his own attack!

Bridget, Tony and Jane left the island early March, all on cruise ships; Jane to enjoy the wonders of the Peninsula on Ocean Nova, Tony to the Falklands on Polar Star and Bridget to Ushuaia, in the 5 star owners suite on Prince Albert ll. Before Bridget left, in order to ensure there were enough ‘Made in SG’ souvenirs left in the shop for the last of the cruise ships, she enlisted the help of everyone to get the last of the sanding and polishing completed. 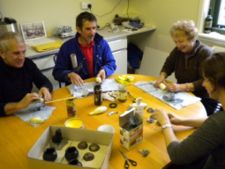 ‘Buy a hat, kill a rat’ became a catch phrase recently during one of my SGHT presentations on a cruise ship. The outdoor bbq was quite chilly and Linda McRae’s woolly hats were quite a hit. Thanks to Rolf Stange, Expedition Leader, for buying the first hat and setting a new fashion trend. 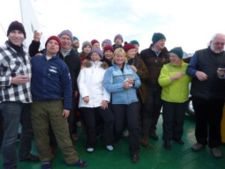 My last month on the island will see me office bound, getting the last of the season’s admin completed, stocktaking, ordering for next season and helping Elsa with curatorial administration. I am hoping that the boiler which is due to take its last breath will manage to hold on long enough to keep me warm while I do so!