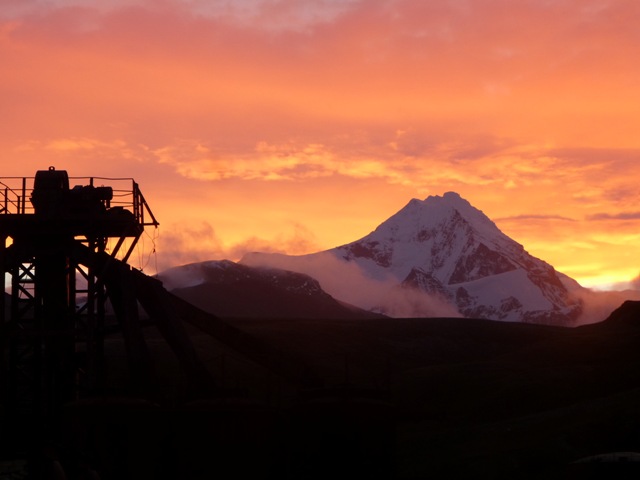 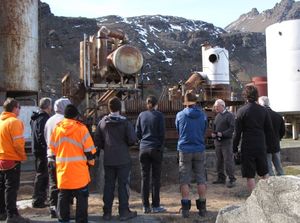 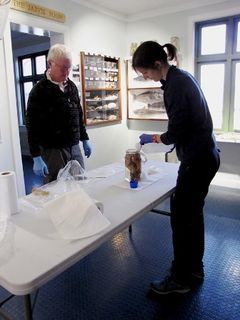 It was another busy tour ship schedule through March which coincided with a noticeable change in the weather back to colder more wintry conditions with regular snowfall, which added urgency to our efforts to get the maintenance of the out-door artefacts completed. The object that got the most attention this season was a boom associated with one of our local whale catcher vessels. It was stripped back to bare wood, and Dickie Hall scarfed in some new wood to rebuild a small area where the wood had rotted. He also made a new wooden support as one of the three it usually lies on had been shattered by a young somnolent elephant seal bull last summer who thought it was a comfy resting place. The boom was then repainted and basically now looks tidier but just like it did before we started. Such is the way with much museum work…..the best work should not be noticeable at all. Sadly the poor weather also meant that three expected vessel did not manage to land at Grytviken. This included the last ship of the season. It is disappointing not just for the visitors but also for the museum staff who are all ready and stood by, hoping the weather will drop and allow the visit to go ahead but eventually the ship’s tight schedule means that the opportunity passes and the ship has to move on. The Government Electricians, Andy and Adrian, completed the fabulous work they have done putting in new lights in the exhibition areas by installing the LED spot lights in the Carr Maritime Gallery. This is another of those improvements that makes a huge difference but that few visitors actually notice other than to say how clean and bright things are looking. National Geographic Explorer made her last visit of the season in mid-March. She is a regular visitor and the staff and crew and operators give us tremendous support. This time she was giving passage to Curator Lorna Weir and Museum Assistants Danielle Mates and Jo Hardy – after a very successful and enjoyable season it is always hard to see the break up the team. But, after the hard work of the past five months, the three of them deserved being a little spoiled and enjoyed the fabulous food and amenities of the ship. They also saw some of the less visited Falkland Islands including the very historic Keppel Island. Sarah and Patrick Lurcock remained for another couple of weeks to see the last couple of tour ships through and close the museum down ready for winter. Patrick has developed an in depth tour of the whaling factory which had good take up from the cruise ship visitors. The locals were also given the opportunity, and of course coffee and cakes in the museum staff room were part of the package. There was a great turn out and, moving with the group in and amongst the machinery, Patrick showed what powered the process and how the product flowed through the various processes to turn whale into oil for margarine and meal for cattle feed etc. Vickie, the BAS fish biologist, came over to help us top up the jars of pickled fish and other deep sea weirdys on display in the natural history section. The kilner jars housing samples of things like snake-like eel pouts and the weird snail fish, which lives in the gills of crabs, have slowly leaked over many years threatening to beach their contents. They should now be good for a few more years. As a goodbye gesture, Patrick suffered the ignominy of being bitten by a fur seal pup. The youngster took advantage of him when he was bringing in the big metal interpretive sign by the cemetery. With both hands full and limited vision the pup was able to sneak in from behind and ruin a perfectly good pair of trousers. So now the water has been drained down and what limited heating there is turned off, some vulnerable artefacts have been brought in and put into winter storage, and final accounts done and the doors locked.

Check in again when we are back next October. 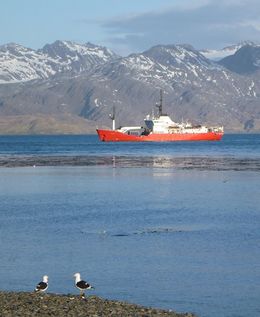 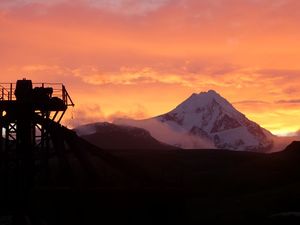 Last one out please turn off the lights