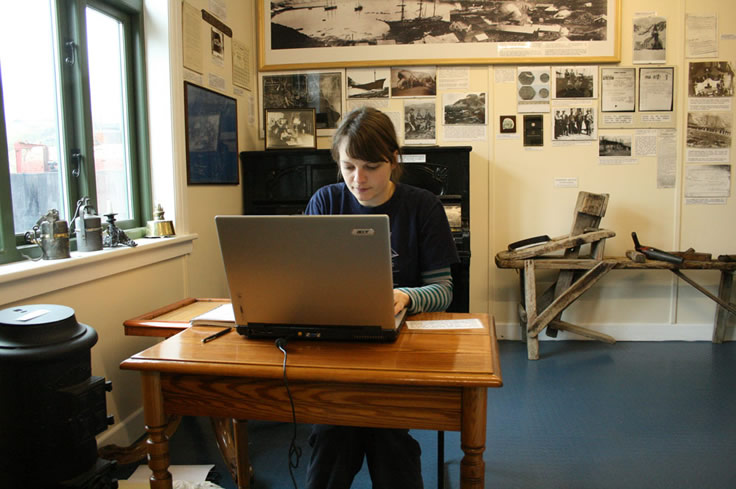 Hello once again from South Georgia. It’s nearly Christmas and things are getting a little festive here at the Museum. On Sunday we plan to decorate the Church in Grytviken. The Church is a wooden construction, which was initially built in Norway before being dismantled and brought here to be re-erected in 1913. The decorating will be helped along by mulled wine and mince pies which are sure to get everyone in the festive spirit.

Over the past few weeks I have been focussing my efforts on the documentation of collections. I have managed to sort out the artefact storage room completing an inventory of all items and generally improving storage conditions. Artefacts have started arriving for the new Carr Maritime Gallery, which include a scale model of the Dias when it was previously known as Viola along with the ships bell. This has been very kindly loaned for the season and transport facilitated by University of Hull Maritime Historical Studies Centre, Specialist Marine Services Hull and Hull Maritime Museum. As soon as building work is completed in the new display area I will be getting the new exhibition ready. As well as the Dias bell and model it will also include a replica of the James Caird which will hopefully be travelling to South Georgia in February.

We are very grateful to the South Georgia Association who made a presentation of a painting to the Museum last week. Bob Headland very kindly took it down from the UK and presented it on behalf of SGA. The painting is of Grytviken Whaling Station as seen from King Edward Point and is believed to have been painted on the occasion of the winter visit of H.E. the Governor of the Falkland Islands and Dependencies, Sir Arnold Wienholt Hodson, August 1927. It is a great addition to the collection and I will be finding a suitable place to display it in the next week.

Last week we also had the pleasure of a visit from Howard Pearce, Chairman of SGHT. It was great to be able to show him the recent developments at the Museum including the new Maritime Gallery. He was travelling as a lecturer on board the Discovery which was our biggest cruise ship so far this season.

The weather has been remarkable over the last few weeks so John and Sarah have started work on the cemetery fence and the main steps into the Museum. This was all going very well until Sarah lost her glasses in an Elephant seal wallow and had to fish them out and then hose them down! John has completed his picnic table and seeing as the weather has been so nice we have dined outside nearly every day, it has also been greatly enjoyed by the cruise ship passengers and visiting yachts people.

On a personal note I managed to get out camping to the Barff Peninsula over the weekend which was very enjoyable. We had the chance to view three Sooty Albatrosses up close and get some beautiful photographs, which was a real treat. There are also reindeer on the Barff but unfortunately we did not encounter any on our trip. The number of fur seals is growing around base and there is now a large male just outside Larsen house, where we stay, who growls every time we walk passed. You would think he’d get bored eventually!

Merry Christmas from us all at South Georgia Museum