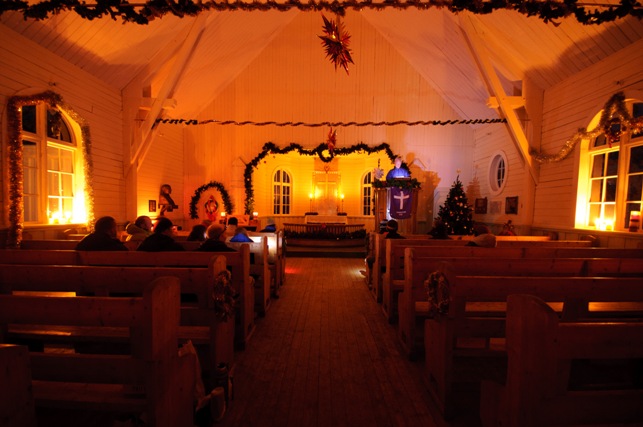 CURATORIAL INTERN KATIE MURRAY GIVES US A RUN DOWN OF THE LAST MONTH AT THE SOUTH GEORGIA MUSEUM. HAPPY NEW YEAR!

The last month of 2011 has seen the museum in a whirl of activity with cruise ship visits and festive preparations. It has also been a time of comings and goings. Hugh, the museum handyman, arrived in the middle of the month. He will work part time for the museum as well as taking on the role of South Georgia Postmaster.

Sue and Henrik, who will take on the role of museum assistants, came on Christmas day. They went straight from ship to shop on one of the busiest days of the season so far and really rose to the occasion. With years of experience as expedition leaders on cruise ships they already know South Georgia pretty well. Since their arrival they have been busy with the shop, stock take, and general museum work.

Graham, the helicopter engineer for the Habitat Restoration Project, was also here for a few weeks. With the help of Matt Holmes, the technician at King Edward Point, he performed the stellar feat of dismantling and packing up two helicopters in six days, so they could be taken back to the Falkland Islands for servicing.

Sadly, we said goodbye to Liz and Tom a few days before Christmas. They are missed around the museum- even Tom’s constant whistling! The night before they left everybody on the island got together for a South Georgia themed meal, which included bittercress salad, steamed burnet and king penguin pie (actually chicken and ham). Liz will continue to work for SGHT from the UK, whilst Tom returns to his job as an estate manager. 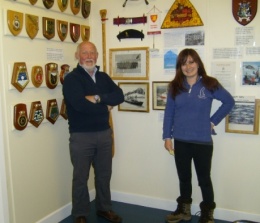 From a curatorial point of view, it has been a busy month. In several days of chaos, Tom and I installed two displays . The first of these is about Shackleton House, which for years was the main accommodation building at King Edward Point. This saw us scratching our heads as we tried to work out how to fix, among other things, a ships steering wheel, a Russian balaika and a military flag to the wall! We also redisplayed a section about the radio and radar used on whaling ships.

The museum also received some fascinating artefacts that required to be documented and put on display. Following the interment last month, Frank Wild’s biographer Angie Butler kindly donated two memorial cards from his original funeral in South Africa in 1939. One of these was from his wife Beatrice ‘Trix’ Wild; the other, which includes a beautifully handwritten poem, from friends of theirs. Very exciting- and a valuable addition to the museum collection.

Later in the month we received a lovely example of whalers craft in the form of a ‘Norwegian’ bushcraft knife. It’s owner worked for Christian Salvesens & Co in the 1950s and had crafted a new handle out of sperm whale tooth whilst working on board the whaling catcher Southern Venturer.

Another exciting task has been to begin a preliminary survey of the wreck of the sailing barque Louise, with help from BAS boating officer Matt Kenney. Louise is one of the oldest parts of Grytviken, having delivered the materials for building the whaling station back in 1904. Matt and I have been using a small dinghy to get in and around the wreck, taking measurements and photographs, and scouring the nearby shoreline for any nails or dowls that have broken off.

As for everyone else, Liz revamped the shop, giving it a more professional look and creating more space. Tom continued work on the Made on South Georgia Island crafts. Hugh has been busy tidying up the cemetery, maintaining the outdoor artefacts and painting the workshop. He had a fun day playing at ‘trains’ when he repainted one of the old wagons! Tom, Hugh and Sarah also helped to dismantle the helicopter- possibly not something expected of everyday museum work. Sarah, when not buried under a mound of paperwork, has continued giving presentations and fundraising for the Habitat Restoration project. She is also learning about aspects of the curatorial work.

Amongst all this have been a few moments of rest and recuperation. Sarah and I have both been camping, Sarah at Maiviken and myself at Harpon, where I ‘bivvied’ outside and listened to bits of the Lyall glacier falling into the sea. Tom and I walked to Maiviken to see the baby gentoo penguins- and while we were away Liz got some fantastic photographs of a light-mantled sooty albatross that was paying a visit to Grytviken. The week before Christmas Hugh and I found ourselves sunbathing and swimming in a local lake- certainly a first for this particular Scot!

Bark Europa in the bay

The whole museum team have enjoyed meals and barbecues on various cruise ships. This included the Bark Europa, a tall ship from Holland. On this particular night I found myself dozens of feet above the ground up on the rigging- and I thought that the scariest thing I would have to do that night was give the Habitat Restoration talk for the first time! 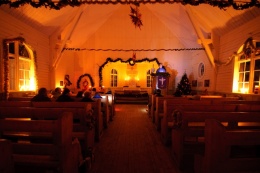 Xmas Eve in the Grytviken Church

The run up to Christmas saw a host of festive celebrations. The whole island got together to decorate the church- aided by mince pies and mulled wine of course. On Christmas Eve we had carol singing and a church service. Le Boreal visited Grytviken on Christmas day with many of the passengers clad in santa hats. Sarah, Sue and Henrik enjoyed dinner on board that evening, while Hugh and I joined in the festivities at the BAS base.

Hogmanay was dinner and a party at the BAS base, it being difficult to ‘first-foot’ very far on South Georgia!

I will be leaving the island later this month. It will be sad to leave but I am immensely grateful for my time here. As well as spending time on this wonderful island it has been great to have had the chance to carry out real curatorial work and put the skills I learned into practice. I hope that museum work can continue to take me to these exciting places!

Finally, Happy New Year from South Georgia Museum, and all the best for 2012!