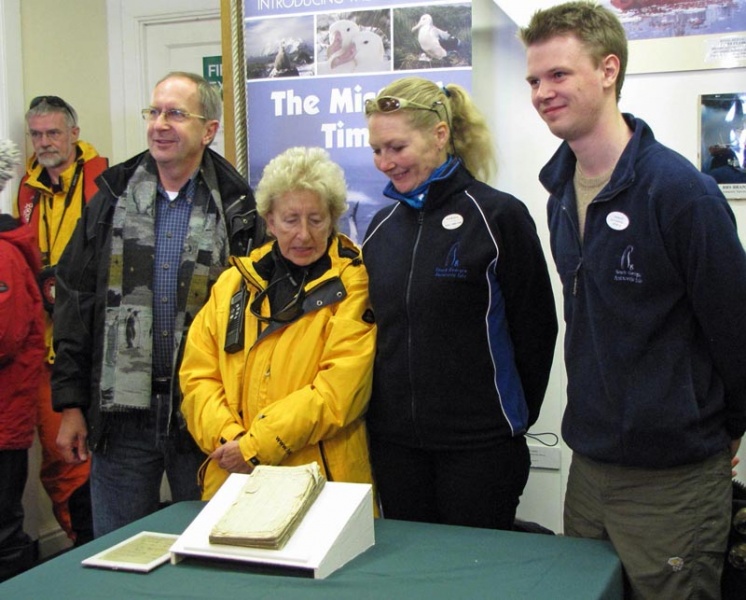 MUSEUM ASSISTANT GEMMA FRENCH BRINGS US TO DATE TO THE END OF THE YEAR. 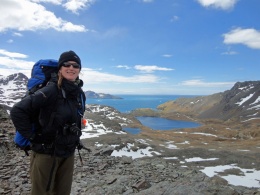 Although December started off with a quiet period the busy Christmas season took hold this month and time has flown by! My partner Darren and I are the 2012/13 season Museum Assistants. We saw the job advertised in the Penguin News (the Falkland Islands local newspaper) and were lucky enough to be offered the positions. Our main duties are to look after the gift shop and the 6000+ tourists that pass through it! We also have become very handy with a mop, as that many tourists bring in significant quantities of seal poop! 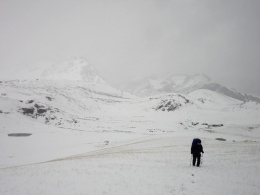 Trudging over the pass in snow.

So December began slowly and quietly and we quickly took advantage of this and headed into the hills for a holiday. South Georgia is an amazing place. Our five day walk took in plenty of wildlife, the most amazing scenery and some very challenging scrambles! Our last day was spent stuck inside the hut at Harpon Glacier as the weather decided to take a turn for the worse, and when it came time to head back to Grytviken we trudged through knee-deep snow for six hours! And I thought it was supposed to be summer!? 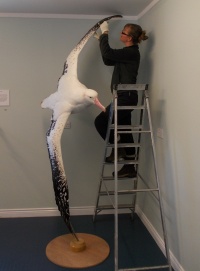 Gemma cleaning the wandering albatross in the Carr Maritime Gallery.

After such a great start to the month, and with not many ships about, it was time to get back to work and finish off the annual deep clean. We managed to get the remainder of the Museum and all the public areas wiped, dusted, scrubbed, mopped and dried. Every single item in the Museum has now been painstakingly (and of course lovingly) cleaned. Darren and I also ticked off a few more jobs on the list by cleaning all the windows of the Museum and Church, helping Sarah and Hugh get the new signs out in front of the Museum and we got started on making the South Georgia Island Crafts – handmade items that we sell in the shop. 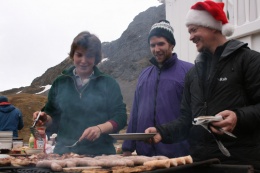 With Christmas fast approaching work and social commitments picked up. The Museum team hosted a Christmas BBQ at the church. This involved the whole community on South Georgia. Everyone came to the Church to help put up the Christmas decorations and for their efforts were rewarded with mulled wine, meat, salad and mince pies. It was a great evening which marked the start of the festive season at Grytviken. Shortly after this the Museum team also hosted a ploughman’s dinner and Christmas quiz at King Edward Point. Unfortunately for me, I was in the losing team but it was great fun none the less. 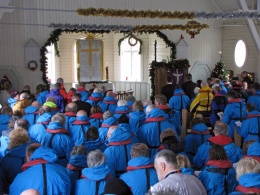 After the quiet start, all too soon we were back to the usual cruise ship craziness! We were visited by the HMS Edinburgh and the Sea Spirit and then rough weather out at sea forced the Bremen to come in a day early. They returned for a second visit for their Christmas eve church service along with the Fram. We also had our own church service on Christmas eve hosted by the BAS Doctor John Weissman. Everyone got involved, including Darren who gave a reading. It was great to see the Church used so much and also to see it so full! 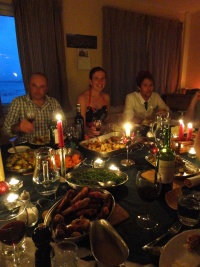 A gorgeous table for the Christmas feast at KEP.

On Christmas Day came Le Borealand the little yacht Malou with it’s father and son crew who had previously visited and now returned to shelter from the weather. The BAS base put on an amazing Christmas feast for everyone and luckily we had Boxing Day off to finish digesting.The social calendar here on South Georgia has been chocabloc – the team of builders, who have been refurbishing Discovery House, decided to temporarily convert the soon to be conference room into a bar with VIP area and hot dog stand! The whole base turned out for beer, sausages and dancing!

Between Christmas and New Year we were also visited by L’ Austral, the super-yacht Arctic P and the Hanseatic. Thomas, our Curatorial Intern, was especially excited at the arrival of the Hanseatic as they kindly brought with them the original almanac from Shackleton’s voyage from Elephant Island to South Georgia. We had an official handover of the almanac and it will take pride of place in the Fullerton Room. Captain Natke of MV Hanseatic had collected the almanac in Cape Town from the James family. The almanac had been given to Reginald James, scientist on board Shackleton’s Endurance, by Worsley to mark the work they had done together navigating in the ice of the Weddell Sea. The Hanseatic left just in time for us to get our glad rags on for yet another social event – the New Years Eve party!

A very happy new year to you all from the Museum Team! 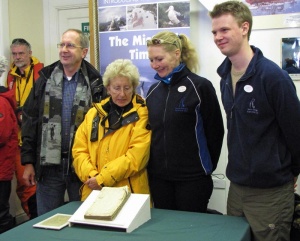