The hut at St Andrews Bay 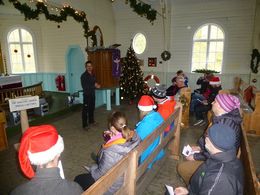 Simon officiates at the locals’ Christmas service in the Church

November ended with myself and Tim Stenning walking over to St Andrews and spending a couple of nights in the hut, what an incredible place! Tim needed to do a structural survey of the hut and I was lucky enough to be asked to go with him.December 1st down this end of the island brought a flurry of activity with Christmas decorations – the Church was decorated by all the island residents amid carols, mulled wine and mince pies.

Many ships held Christmas services in the Church, some had their own musicians/organists on board. When we could, all of us at the museum attended. Simon (Government Officer) kindly organised and held a service for the island locals on Christmas eve which was a perfect start to Christmas day in South Georgia.

The Christmas period was a busy time for ship visits but we managed to fit in a wonderful traditional Christmas dinner at the base, produced by Vicki Foster with a mega plum pudding made by Danielle from her mum’s recipe. Christmas day kicked off with a cruise ship visit and ended with a BBQ hosted by the builders, in the sunshine. A very happy Christmas made memorable by everyone on the island.

It was a fabulous moment to watch this pup being born

During December we were invaded by Fur Seals, with pups appearing everyday. Big Boy – our resident male fur seal on the beach by the ship Dias– gathered four ladies for himself and now has four pups, one of which we were lucky enough to be present at the birth of! An emotional moment!Track Boy – another resident male further along the beach – eventually found his harem too much for him and with the final count at 20 ladies and 20 pups he handed over a large part of his family to two new males that arrived on the beach.

Sadly, the weaners are now starting to head off and by New Year only a few are left. They have been great companions and will be greatly missed.
During December, as the days grew longer, we were treated to some amazing sunsets and sunrises along with some superb cloudscapes. Here is one of the sunsets.

2016 was of course seen off in style, and now we are into yet another busy cruise ship month at the Museum. 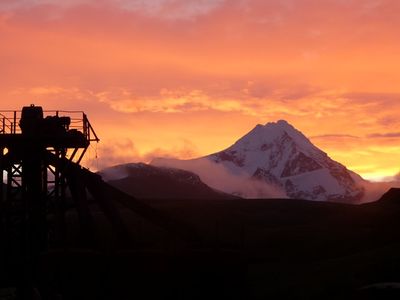 HAPPY NEW YEAR TO ALL