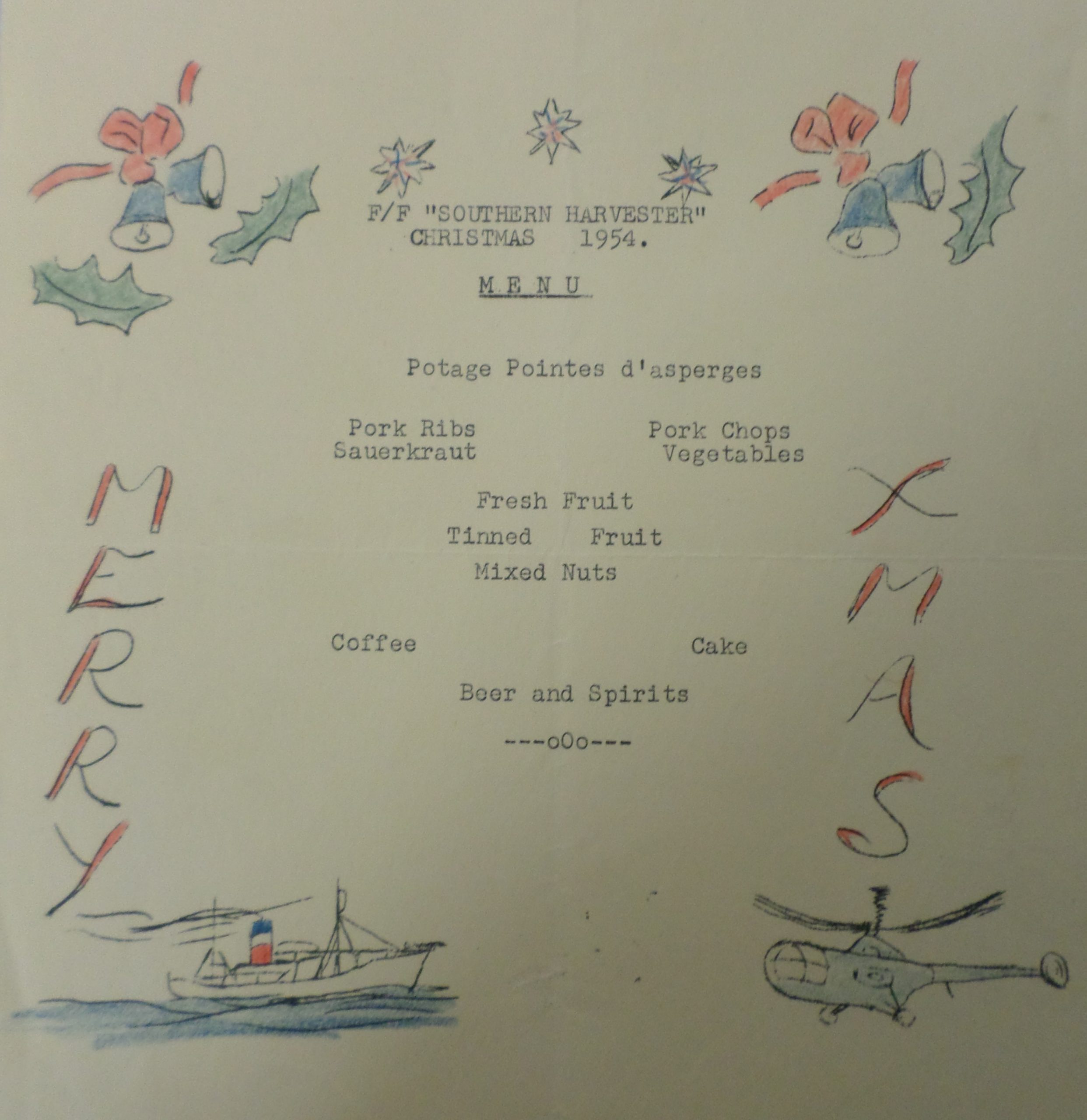 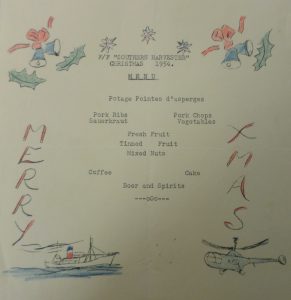 The menu is part of a small collection donated by Bill Loftus, who worked as a whaling helicopter pilot on board the whaling factory ships. The whaling factory would have been sailing in the Southern Ocean as far as the west of the Antarctic Peninsula to maximise the summer season, when sea ice is limited and whales had migrated south to feed on Antarctic Krill. Being out at sea for long spells Christmas would have been on board far from land and loved ones. The telegram would have been the only means to communicate with families back at home.

Photo: A Christmas telegram sent by radiotelegraphy from Canada via Cambridge wishing a loved one a Happy Christmas. The message was sent to the Southern Harvester a whaling factory ship that would have been circulating the Southern Ocean in search of whales.

Industrial whaling emerged with organized fleets of whale ships as early as the 17th century. As competition grew with the price of whale oil, the first half of the 20th century saw the introduction of factory ships along with the concept of whale harvesting.

Christmas card from Salvesen & Co. Picture of the whaling ship Southern Venturer, which also shows the smaller whale catchers and the helicopter used for spotting whales.

The Edinburgh-based Christian Salvesen & Co, commissioned the production of two factory ships which were like a floating whaling station. These were large ocean-going vessels with extensive on-board equipment for processing whales. This replaced the need for shore based whaling stations and allowed the ship to follow the whales into deeper oceans away from land. Southern Harvester was completed in October 1946 by the Furness Shipbuilding Company located on the Tees near Middlesbrough in England and was the sister ship of Southern Venturer, also built by Furness in 1945. It had been completed in time for the start of the 1946-47 whale catch season in the Southern Ocean and Antarctic whaling grounds.

Southern Harvester docked in Leith Harbour, South Georgia. You can see the crew painting the sides ahead of the long journey home – note the Southern Venturer is in left background. Photo by John Alexander

The Southern Harvester was cramped but fully equipped to process whales and included a crew of 380 men. The ship would also have been supported by 220 more crew working aboard vessels such as the whale-catchers, buoy boats, and tug-boats. The support boats were used for rounding up, holding and towing the whales killed during a hunt, helicopters were introduced later to help spot the whales.

Southern Venturer. The stern-slipway enabled whales to be hauled directly onto the flensing deck of the vessel where they could be cut down and then processed below decks in cookers and boilers.

Whale meat was a by-product of the lucrative whale oil industry, and the meat from carcasses aboard the Southern Harvester was processed to produce whale oil, bone meal, meat powder, and gravy concentrate, wasting little in the processing of a whales carcass.