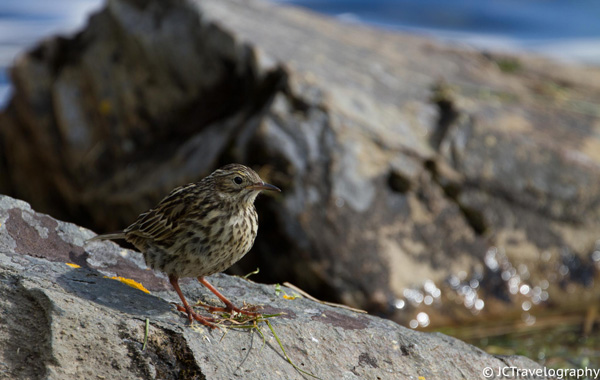 The Transition between 2015 and 2016 has been a busy one for everyone here at the South Georgia Museum. After the successful church decoration event with summer snow coating the ground thickly (followed by a snow ball fight) Christmas at Grytviken was in full swing. One or two of the cruise ships set up stands supplying mulled wine and hot chocolate (with whisky) to help ward off the harsh winds, and we too were able to sample the delicious offerings. When they packed up we were overwhelmed by the generous donation of left over biscuits and stollen. 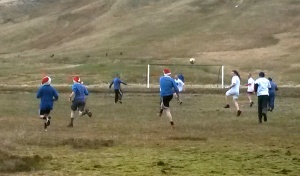 Christmas Eve was a ship-free day so all the locals and the crew of the Pharos SG could get involved in the afternoon of events. Starting with a football match on possibly the world’s worst pitch – one end is a scree surface whilst the far end is a bog – with the ever present prickly burnet seed heads attaching to anything and everything . The score was a 3 all draw. Passengers and crew from a visiting yacht joined us in the church directly after the match for a carol service, conducted by Government Officer Simon. Our curator Matthew, the musical maestro, succeeded in making the slightly out of tune organ sound extremely professional and old favourites such as Away in a Manger and Silent Night resonated through the eaves of the old whalers’ church. 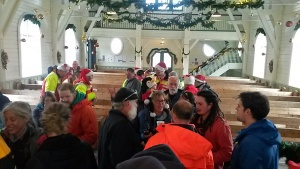 Christmas day bought blazing sunshine, great for the builders’ lunchtime BBQ, and we could all soak up the sunshine and tuck into some Falkland Islands meat before welcoming Le Lyrial for a very festive cruise ship visit later. With fewer cruise ships over New Year we were able to get some of the core museum maintenance work started and also finally managed to finish cataloguing the roughly 1300 individual items in the old building called the Engineers’ Workshop. This was a massive job that needed everyone in the museum helping to cut and tie labels onto every item in the dark and dusty old building. I was not looking forward to helping out on this job, but after a few hours of being snowed on indoors (lots of holes in the roof) my eyes became adjusted to the dim light and I took solace in the calming effects of tying labels to bits of metal, and even volunteered to go back and help scribe for Matthew who had the unenviable task of numbering and describing every single item, down to the last “round bit of metal”. A key player on this project was Artist in Residence Jamie Grant and with his six weeks with us almost over he was up at all hours getting the last photographs of everything that had to be catalogued. At 2am on his last morning he climbed Mt. Hodges and was rewarded with great photos of the sunrise and the spectacular lenticular clouds over the surrounding hills, and was back down and ready to sail on the Pharos by 8am. The museum deep clean has been another on-going job and is a far more rigorous and in-depth process than I had expected. We started with a training session from Matthew about the do’s and don’ts of touching and very carefully cleaning museum objects. This is another mammoth task. At last count we still have four rooms to complete. 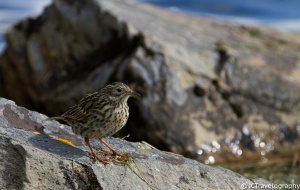 The pipit is one of the first birds to resettle freshly rat cleared areas as a result of the ongoing SGHT Habitat Restoration Project. Photo Jamie Coleman

As the volunteer fundraiser on the team for the on-going SGHT Habitat Restoration Project I have been kept busy doing presentations about the project on board the visiting ships and processing donations etc. The project is in its monitoring phase and it is still vital that we raise funds in order complete a full and thorough assessment of whether there are any rats still present in any area of South Georgia, missing any signs could mean the whole project failing . I have been blown away by the response from all our many donors who want to help South Georgia become a bigger paradise for wildlife. With the eradication of the rats it is estimated that the island could become home to over a hundred million more seabirds. I also enjoying working with the cruise ships the staff who make the auctions happen on-board the ships – we have had great result from many of the ships again this year, which wouldn’t be possible without the enthusiasm of the expedition staff and many others. What is keeping us busy now? Seven ships in one week along with a visit from our Royal Patron The Princess Royal! 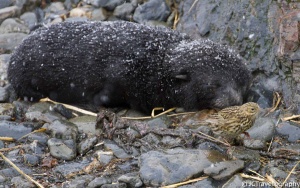 A pipit and a fur seal puppy at Maiviken. Photo Jamie Coleman