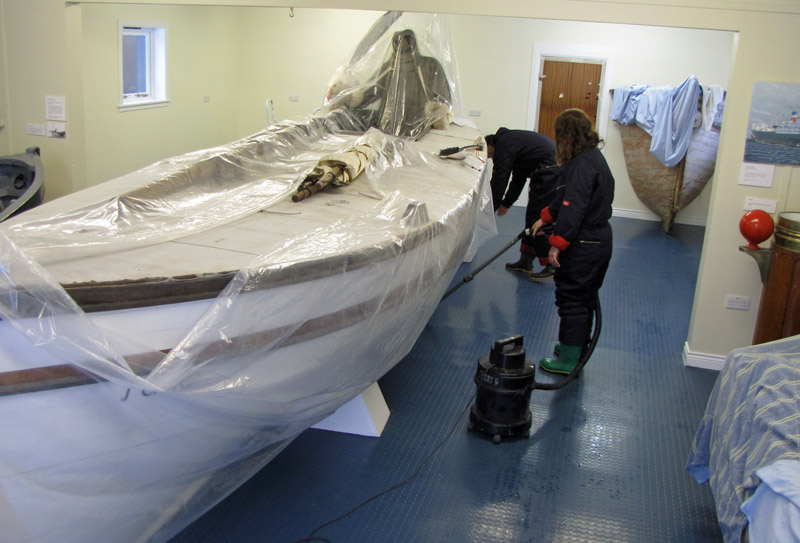 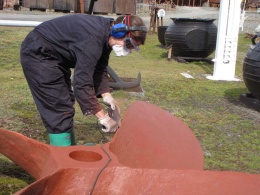 Josie working on the Albatros propeller.

Greetings from a sunny South Georgia! Believe it or not we’ve had some really hot… yes, I did say hot… days this month! It’s also been a much quieter month on the cruise ship front so we have had a good chance to forge ahead with the continuing deep clean of the museum and maintenance of the outdoor artifacts.Whilst undertaking some maintenance on one of the large propellers at the front of the museum, we made an interesting discovery. During the removal of the upper layers of paint I noticed some white markings, which appeared to be letters. We had a bit of fun trying to figure out what it said, Sarah suddenly got it and realized it spelt ‘Albatros’ with a date of 1920 underneath. The Albatros is one of the boats beached nearby the Museum so it was an interesting find.

We’re not the only ones who have been busy with maintenance, The Carr Maritime Gallery has had some building work done, sealing up a set of unneeded double doors that were not weather-tight. The builders did a smashing job and it’s hard to believe there were ever doors at the back. We followed the work with the deep clean; it was great to get the room reorganised and the gallery open again in time for our latest batch of cruise ships. 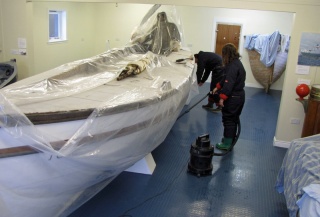 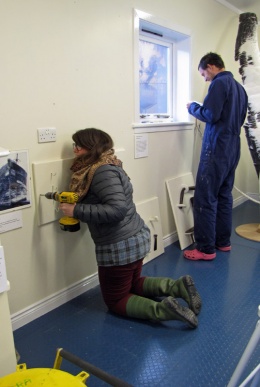 Deep cleaning and reinstating the Carr Maritime Gallery after the builders work.

Over the last month we have had such an array of visitors, from film crews to heroic adventure seekers. This month heralded the return of our Germany ‘resident’ family calling in again, they have been spending most of the summer sailing around the Island. It’s such an inspiring trip that they’re on and it’s been lovely to be able to catch up with their news and adventures again. 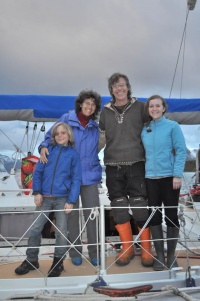 This German family have spent most of the summer exploring the island.

In response to the increasing number of pipit sightings in rat cleared areas we have introduced a ‘Pipit Log’ in the Museum foyer to document their return to mainland areas. It will be exciting to see how this develops over the coming months. On the note of logs, we have also had a fantastic number of entries on our whale log over the last few weeks. Some ships have almost been unable to count all the individuals in the pods they saw, which must have been a magical sight. We’ve not seen any whales this summer, though others have seen many humpback whales near the Barff Peninsula, but there is time for us to see some yet, here’s hoping! You can check out our up to date findings through the links on the SGHT website www.sght.org

Well, I’m off back to the Island Craft workshop…

All the best, Josie 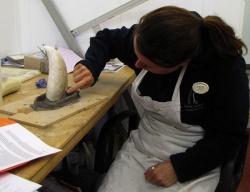 Josie in the Island Craft workshop.