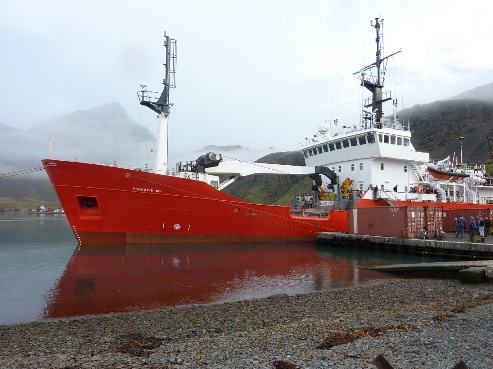 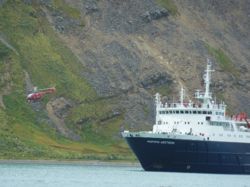 The weather at Grytviken in February has been excellent – at least as good as summer in Aberdeenshire where I come from. Most cruise ships seem to have been here on warm, sunny days, and the passengers saw the island at its best.

We had a total of nine cruise ships in this month, with around an average of a hundred passengers each. On 13th February we welcomed “Marina Svetaeva”, a long-awaited visit as she brought with her the first five members of the rat eradication team, and the two helicopters to be used for spreading the bait. All work stopped around lunchtime when, one by one, the helicopters were prepared for flight and took off across King Edward Cove to their new home at the whaling station.

Some of the cruise ships kindly invite residents of King Edward Point and Grytviken on board for dinner or a barbecue, and to hear the SGHT habitat restoration talk and appeal for donations, and it also gives passengers a chance to ask us questions, and for us to enjoy their lovely food, especially salads and fruit!

We also had visits from various yachts, including boats from Australia, Germany, Israel, Belgium, USA and Brazil. The crews on board always bring an exciting international flavour with them, and often invite some of us on board to see their lovely floating homes. Some yachts come with film crews to film South Georgia’s amazing wildlife and scenery – and one crew came with 3D cameras to film penguins for a television programme. The Brazilian yacht “Paratii” had visited South Georgia before when her owner, Amyr Klink, began his long journey to circumnavigate Antarctica south of the 50th parallel from here in November 1998, returning in February 1999 – a journey of 13,340 nautical miles. On this visit she had another crew, including a young child. 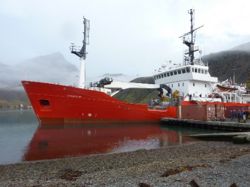 The fisheries protection vessel “Pharos” called in on one of her regular visits, bringing new people to King Edward Point and taking away others. “Pharos” usually brings fresh fruit and vegetables from the Falkland Islands and further, and also very welcome mail from friends and families at home, supplies and equipment, and perhaps new stock for the Museum shop. The remaining members of the rat eradication arrived on board “Pharos”, together with the rat bait needed for this first phase of the ambitious project.
When “Pharos” left she took away Hugh Marsden from the Museum team. We were all very sorry to see him go, but look forward to meeting up with him again in Stanley, where some of us will watch him run in the Stanley Marathon and cheer him on. Hugh has continued all season maintaining all the Museum buildings and the cemetery and has left everything in very good order for the coming winter.

Before he left, Hugh helped former dental nurse, Julia Hughes (Museum assistant), re-insert Thies Matzen’s front crown (tooth) using dental cement brought down from Stanley on “Pharos”. The tooth remained in place until the next day when he was talking to someone onshore from his boat and the tooth fell out – straight into the sea. A diver from one of the other yachts spent a considerable amount of time searching in two to three metres of water, but unfortunately the tooth was not recovered.

As I write this I am watching from my window the helicopters with their underslung bait hoppers heading to and from the Greene Peninsula – the rat eradication has begun, and soon this part of South Georgia will be rat free and all the ground nesting birds will be left in peace to rear their young and come back to the area in numbers not seen since the rats first arrived on sealing and whaling vessels centuries ago. Very exciting!

MUSEUM TEAM SUCCESS IN THE SOUTH GEORGIA HALF MARATHON!

The South Georgia Half Marathon was held on the 10th February 2011. The half marathon course takes in mountains, scree slopes, bogs and the odd bit of flat ground just for good measure!

The Museum team showed them how it’s done this year with Hugh Marsden taking first place in the running section and Tony Hall and Julia Hughes taking joint first in the walking category. 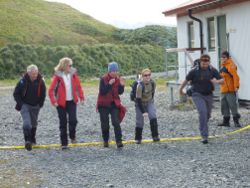 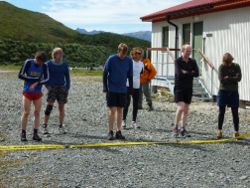 …they were shortly followed by those running the course. 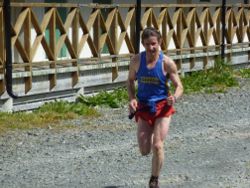 Museum Handyman Hugh Marsden on the home straight as he goes on to take first place in the 2011 South Georgia Half Marathon. 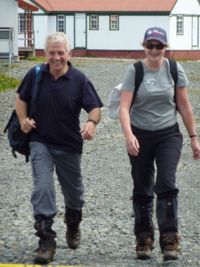 Tony Hall and Julia Hughes smile as they take first place in the walking category.