MUSEUM ASSISTANT HENRICK LØVENDAHL WRITES OF EVENTS IN FEBRUARY AS THE SEASON DRAWS TO A CLOSE.

With February being a slightly shorter month it feels like time has gone way to fast. Despite having fewer visits by cruise ships we still had a very busy month. We started by tradition with a stocktake, and even though we were missing young Katie, we still managed to get it done in one day. 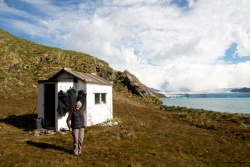 During a quite period we took a week off to get away camping. We all went across to the Barff Peninsula for a small holiday. Sarah and Pat spent their time around the hut at Corral and Sue and Henrik took up residency in the hut at Sorling. The weather was a bit mixed, as one could expect in South Georgia, but we all managed to get out to explore the magical nature of the Barff Peninsula. Sitting quietly for an hour admiring the courtship rituals of the beautiful light-mantled sooty albatross on their nest only meters away. Wandering around near the Nordenskjold Glacier watching in awe as tons of ice calved from the glacier splashing into the sea below. Taking a full day hike to Ocean Harbour with its many seals and penguins. Let us not forget that these are the unique opportunities that one may get when working for SGHT at the Museum in Grytviken, and definitely one of the reasons for us to come here. 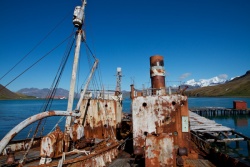 Under supervision of the GSGSSI Building Supervisor we had the opportunity to get on board the three beached whaling vessels in front of Grytviken. It was very exciting gently wandering around exploring the rusting hulks and imagining how life and work would have been on board in those days. 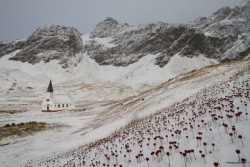 There is a definite change of season. Around Christmas time the sun would rise around 4am, now it is coming up at 6am. It is also moving across the sky in a much lower orbit and setting a couple of hours earlier than a few months ago. Even though we are still having nice days, the temperature is generally a few degrees lower, and even on sunny days there’s a chill in the air and even a skim of ice on the cove.It has been snowing lightly for several days but on the morning of February 23 we woke to a snow covered winter landscape. The mountains all around us were covered in snow, and on the hillsides around Grytviken only the little delicate heads of the Burnet were visible. It looks so different here when covered in snow. 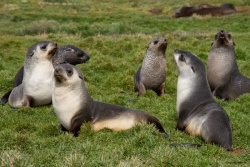 The bay is still busy with young fur seals playing in the shallow water, young elephant seals huddling up in their wallows moulting their coat and king penguins standing around in small groups patiently waiting for a new armour of feathers to regrow. This year’s fur seal pups are growing up. Their furry coat is changing to a silver-grey colour. They now have so much attitude and courage. When we walk past them they turn and growl, look at you as if to say, “come on I can handle you”. However as soon as we stop and look at them they turn and run, they are so much fun and very cute. 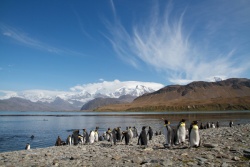 The change of weather also marks the change of season for the people that have been spending the summer here. For many of us it sadly means the end of a wonderful season here in Grytviken. It is slowing down with regards to visiting cruise ship’s as it is also the end of season for them. We expect the last visit in early April. So for us at the Museum we are now catching up on end of season projects like maintenance and preparation for shutting down. We have been getting into some painting through the Museum and minor repair jobs that needed doing. The builders from Stanley are all working hard catching up with their long list of jobs to do before they too have to leave. For the BAS people on the base it means that soon they will have the place all to themselves. They are getting excited about the changing weather and scenery, and the different routines that winter will bring.

One of the more interesting visits of the season happened when the charter yacht Hans Hanssen arrived. On board was Hugh Fearnley-Whittingstall. He is a well-known celebrity chef in the UK and often appears on the TV. With him, he had a small camera crew and they wanted to make a segment here from Grytviken. They spent a busy couple of days here before sailing back towards the Falkland Islands via Bird Island. We were fortunate to be treated to an exciting cook-off between Hugh and Gerard Baker, also a chef and known from Radio 4 and BBC Food Magazine, using krill as the main ingredient. As February comes to an end it means that Sue and I (Henrik) will have to pack our bags and leave for home. Our two and a half month here on South Georgia has truly been a wonderful and rewarding experience. It has been fun to work with Sarah, Katie and Hugh here at the Museum. It has been great to meet all the wonderful and interesting people from all over the world on the visiting ships. We have had lots of memorable moments with the BAS crew at KEP. We will forever treasure our time here and the opportunities we were given to get out to explore and enjoy the magical nature of South Georgia. Thank you to everyone here in Grytviken and to SGHT. Henrik Løvendahl & Sue Werner