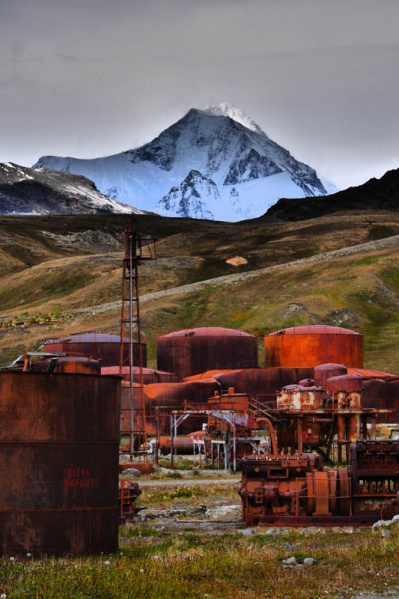 VOLUNTEER SAM MOORE WRITES ABOUT THE VARIED EXPERIENCES HE HAS HAD DURING HIS MONTH HELPING OUT AT THE MUSEUM. 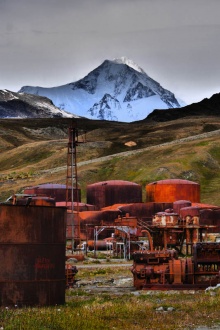 Hello there, my name is Sam. I came to South Georgia to load bait for the SGHT Habitat Restoration Project but for the last month I’ve had the honour of volunteering at the Museum here. To say the least it has been an educational month; slightly manic as well. We’ve seen sixteen ships through, helped with fieldwork for scientists from the KEP science base, run a half marathon, added amazing new artefacts, expanded exhibits, continued the endless maintenance, and raised buckets of money to help kill off the rats.

Most of my time here has been spent sorting out details for the HR project; locating and inventorying supplies, finding exact specifications for equipment already here, and sorting out the outboard for our boat. There have been water pumps to test, hard hats to count, and even duck rings to find. When I’ve had time free I’ve been trying to make it easier for the museum crew to devote themselves to projects other than the day to day upkeep of the Museum itself. Whether it’s mopping up after crowds come through, or finishing off Island Crafts products; I’ve been doing my best to fill in the holes and provide Sarah, Thomas, Gemma, and Darren time to get after more important tasks.

Thomas has continued his impressive pace of updating and revamping exhibits. Most interesting of all has been the addition of the Worsley Almanac to the Shackleton exhibit, made possible by the James family. Now finally on display this battered and frayed book speaks volumes about the desperate bid Shackleton and his men made. Thomas has also added new exhibits on the Rat and Reindeer eradication projects as well as a display of some of the newest acquisitions. Most interesting to me are a sextant found in Leith and an unused flensing knife with its blade still wrapped and bound.

Darren and Gemma have been dealing with hordes upon hordes of tourists as the shop has been at times filled, with barely room for even wallets to be pulled out. Somehow the pair have at the same time continued to produce some incredible Island Crafts, keeping the shop stocked as well as making some unique pieces. These limited edition castings are auctioned off on cruise ships to raise money for the Habitat Restoration (rat eradication) project. Darren made a raised base for the Carse Expeditions display to protect the artefacts; and a whale gun out front has a new chock, and a new case is in the pipeline for the Jarvis Room. 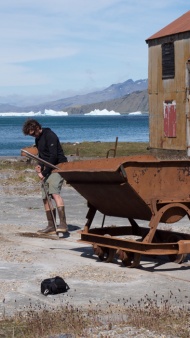 Together we have been working on maintaining the artefacts outside the front of the Museum, most of the steel has just needed its paint patched in small spots, but the mast from the Albatros whale-catcher needs a lot more care and attention. Water has infiltrated the paint and soaked its way through almost the entire timber. We’ve had some luck in good clear weather that has let us strip most of the paint away to let it dry in the rare sunlight and wind, but it has been a battle to keep it wrapped in plastic and protected from the normal damp drizzle. Advise is being sought as to how to best preserve the spar. 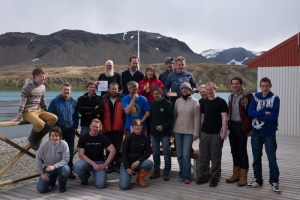 The competitors and marshals after the half marathon.

All being said it hasn’t just been hard work here. I’ve been hearing about the legendary half marathon here since my brother ran it five years ago while also working at the Museum. While I can in no way claim to have run it myself, it was loads of fun to hike up to the top of Brown Mountain and take photos of the runners as they came by. It was really impressive to see the pace put on over some truly rugged terrain. In the end GSGSSI CEO Martin Collins managed to win just seconds ahead of our Postal Officer/Handyman Hugh. In all thirteen competitors ran, walked or runkled the course. 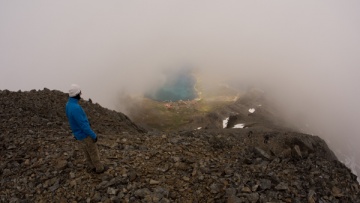 Looking down on Grytviken from Mt Hodges.

Thomas and I managed to get away from Grytviken for a three-day holiday. We started by heading north up Bore Valley before striking our way up the scree to the lakes below Mount Hodges and Petrel Peak. Once we found our way into Papua Valley we traversed over into Carr Valley to seek out a cave we had heard of in Curlew Cove. After dropping what had to be 400 meters back to sea level we finally did find the cave and discovered that it was already occupied by a dozen or so unamused fur seals. We decided that discretion was the better part of valour and clawed our way back up the tussac to the lake where we made camp for the night. We struck out the next morning by finishing the climb back into Papua Valley and made our way down to the beach for lunch. After wasting an hour or so waiting for a berg to breakup, we finally set on our way south. Once in Sphagnum Valley we again made our way to the beach and had a fun time dodging some of the largest fur seals I’ve seen on our way to the hut at Harpon Bay. Watching the sun set as we leaned up against the warm black siding of the hut was a better reward than I could have imagined. We spent the next day lazing about, staring at the Lyell Glacier and reading books in the hut when it rained. Snow greeted us the next day as we headed for Echo Pass. It was a bit shocking to finally see Grytviken and KEP covered in four inches soggy heavy white stuff. 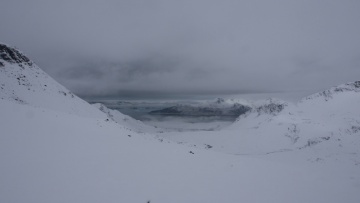 I’m days away from boarding the RRS Ernest Shackleton as I now join the Rat Project which is poised to get under-way. My time here in Grytviken has been too short by a long shot but I’ll cherish every second of it. From the mopping of floors to the hikes, it has all been special.