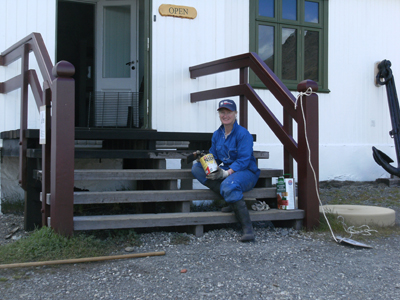 Time for another update from South Georgia Museum. As general manager of the museum I am responsible for the day to day running of the museum and shop. This includes organising cleaning and maintenance, manning of the shop, stock ordering and management for the shop, finances, general correspondence and being a point of contact for the government officer. This is my third season on the island, having spent 2 seasons running the post office at KEP, before heading to the far side of the cove and joining the team at the museum.

The season has reached it’s mid point rather quickly. 3 months ago I was whisked direct from the Lan Chile flight landing at MPA in the Falklands, to the Fisheries Patrol vessel waiting in Stanley, with no time to even stop in at the famous West Store to do last minute shopping. I was accompanied on the voyage down by the lads from Morrison Construction who were coming down to complete the Hydro Electric scheme. The whaling station at Grytviken had hydro electric power when it was in use earlier this century. Now a completely new system has been installed using the Gull Lake water to turn the turbine and the dam to control the level of the lake. The original Dam is still in place but underwent some major strengthening work to bring it up to specification. With the price of fuel, and the maintenance costs of running generators and oil fired boilers, the hydro scheme will be of great benefit to the Island — not only with the annual running costs, but it will be environmentally beneficial too.

Christmas comes at a very busy time of the year for everyone on base which doesn’t allow a lot of time to get excited about Santas imminent visit however, Christmas on South Georgia is like Christmas nowhere else in the world. It began about a week before Christmas with decorating the church and willing helpers were encouraged with mulled wine and mince pies. Then there was the midnight Christmas Eve service. Where else in the world would you walk to a Christmas eve service round a little cove, sidestepping snorting elephant seals and growling fur seals, through an abandoned whaling station to a little Norwegian church with bells ringing and windows lit by candles? This year we were joined by passengers from ‘Professor Multanovsky’ and visiting yachties and everyone was involved in some way, from providing musical accompaniment, to joining the choir, to rewriting ‘The Twelve days of Christmas’ to have a South Georgia theme, to making the mince pies and mulled wine that was shared by everyone after the service. A bonus for Museum staff was that there were no ships in on Christmas Day. For the first time in several years we were able to join in the base festivities of opening presents together, cooking, setting and decorating the table and of course eating together. Angy, our base doctor had done a marvellous job of wangling several yummy treats from cruise ships so we were able to enjoy turkey and fresh fruit for our Christmas dinner.

With no ships in over New Year, Elsa Darren and myself, accompanied by George, Robbo and Richie from BAS, escaped for a holiday to St Andrews, the largest King Penguin Colony on South Georgia, a 7 hour hike over the Barff Peninsula. In order to reach the further peninsulas, cut off from KEP by glaciers and high ridges, we go by boat and are dropped off at a suitable spot, hiking the rest of the way. This can be a worry, waiting for the wind to die down enough to take the boats out, hoping it’s not going to rain the whole time you’re camping, and wondering if the weather will allow you to be picked up again! But with fantastic weather, great company and a good supply of liquid new year cheer dropped off by yacht earlier, we had a most incredible experience; the scenery, the wildlife, and the knowledge that we were having a unique experience.

There is work going on here too believe it or not! Elsa and Darren are currently putting the finishing touches to the new Carr Maritime Gallery. The maritime gallery display will also include the ship’s bell and a model of the Dias, formally Viola, which is one of the catchers outside the museum and the remaining pieces of the ‘Alert’ which was the original inshore vessel used in the Discovery scientific investigations. Chris Moore, has joined the team recently and the conservation and display of this artefact is his main project. We are also working on the outside maintenance of the artefacts, Hope Point crosses and cemetery fence. These all require a combination of ship-free time and good weather – not always do they come together!

With weddings in the church ( 2 this season), hosting cocktail parties for cruise ships and ‘get to know your museum’ nights for the locals, and a record number of ship and yacht visits, life at the South Georgia Museum is hectic fun and very rewarding. Roll on next season.