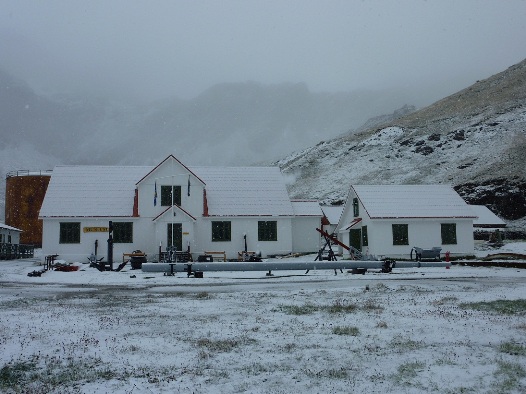 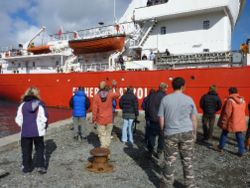 December was a happy month, but had its sadness when the ‘old’ winterers from the British Antarctic Survey base left aboard FPV Pharos on 13th December. Although the Museum is run separately by the South Georgia Heritage Trust, the people on the base always include us in all their social events – Wednesday film nights and Saturday night suppers, and whenever anything special is happening – so it was also very sad for us to watch them go, even though some of us had only known them for a short while. I had only been here for 3 weeks by then, but had been touched by all their friendliness and kindness to me. 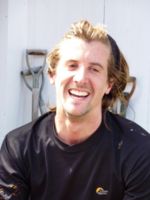 One person who left on the ship had a few days earlier very much made his mark on the island. On 8th December, base sparky Richard Inman tackled the “Mount Hodges Challenge” – to run up from the back door of the Museum to the top of Mount Hodges (1985ft, 605m), the mountain just behind the Museum itself, and back down again to the Museum. The previous record from 5th May 1998 set by Sgt Bill Wright RM ML1 was 49 minutes 41 seconds, and Richy – although slightly slower going up by one minute – shattered the record by over 3 minutes in a time of 46 minutes 15 seconds! At one point he had been dive-bombed by territorial Antarctic terns, and as he prepared for his shower afterwards on base, he found a small fish matted in his hair. Details of his run are now recorded in the South Georgia Travel Book which is kept on the table inside the front door of the Museum, together with the report of Sgt Wright’s previous record on page 58. The small fish is also stuck in the book (page 138)! 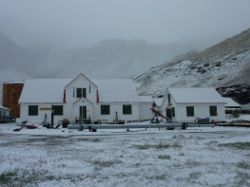 South Georgia Museum in the snow

With eight cruise ships in during the month, and five of them all coming in over the Christmas weekend, the Museum staff were certainly kept busy. Fortunately our new home – Drukken Villa – which stands beside the Museum at Grytviken was finally ready for us to move into just a few days before Christmas, following weeks of restoration by a team of builders from the Falkland Islands, led by Dave Peck. This meant we were on hand and ready to open the Museum whenever a ship appeared around Hope Point, without having to hurtle round the kilometer track from King Edward Point to Grytviken first! Three ships came in on Christmas Eve – Fram, Bremen and Hanseatic. Fram held a short service in the church in the morning, and Hanseatic held one from 2200 hrs until midnight, with lots of hearty German singing and a few readings. Everyone on base here sang “The Twelve Days of Christmas” – South Georgia style! This was followed by gluhwein and cakes for all on Tijuca jetty by the whaling station accompanied by fiddle and bodhrun played by Rob and Jon. A couple of the ships gave us very generous supplies of fresh fruit and vegetables, and two big containers of German Christmas biscuits. We had a very busy Christmas Day with two ships in, after which we were invited to the BAS base for Christmas dinner, and what a wonderful spread they put on!

We reciprocated at Hogmanay (New Year’s Eve) by cooking everyone at KEP and Grytviken a truly Scottish meal – cock-a-leekie soup, Balmoral chicken, and cranachan, and afterwards at 2200 hrs wished all on Bird Island and our friends and families back home in the UK a Happy New Year, before celebrating amongst ourselves at midnight.

Happy New Year to everyone!!

GOOD WEATHER BRINGS WITH IT THE CHANCE TO UNDERTAKE OUTDOOR WORK IN SOUTH GEORGIA!

During the 2009/10 season a major maintenance and conservation project started at the cemetery in Grytviken. Many of the graves had started to deteriorate and the area was badly waterlogged. Hugh Marsden undertook a range of work including digging drainage ditches and the repainting of many grave surrounds. Hugh is now continuing this project during the 2010/11 season and is hard at work securing headstones and repairing grave surrounds as well as keeping the site tidy with regular grass cutting. 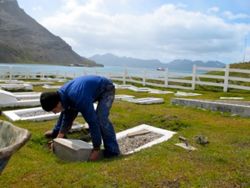 Repairing grave surrounds in the cemetery 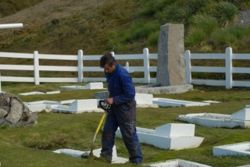 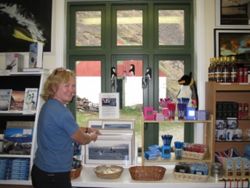 The Museum gift shop has proved to be very popular with visitors again this season. New products include The South Georgia Museum a booklet written by Bob Burton and Elsa Davidson on the Museum and its collection with additional information on the Church and cemetery. If you would like to know more about products available from the shop please contact: Manager Tony Hall. 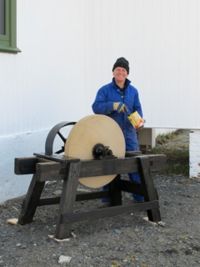 Every year the Museum team have to undertake conservation work on the large artefacts displayed in the Museum forecourt in order to protect them from the harsh sub-Antarctic weather. The artefacts include an anchor from barque Louise, a large bone saw, whale canons and try-pots.