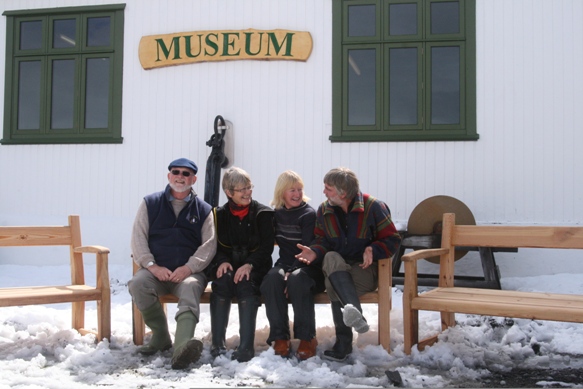 A new exhibition at the Museum on the photography of Theodor Andersson was recently officially opened by the Commissioner of South Georgia and the South Sandwich Islands, Alan Huckle.

This month we welcome a new member to the Museum team!

Happy New Year from all at the South Georgia Museum.

You can now read about Christmas in South Georgia.

We were very pleased to have some special visitors in January – The Commissioner for South Georgia and the South Sandwich Islands, Alan Huckle, came to South Georgia with his wife Helen. Alan was invited to come along and open a new exhibition on the photography of Theodor Andersson which includes the camera Andersson used to create his atmospheric prints of life in Grytviken. This exhibition was made possible thanks to Bo Svalby, the Grandson of Theodor Andersson, who allowed the Museum to display some of his Grandfather’s photographs of whaling and the community at Grytviken taken from 1923-1932. 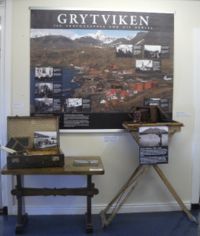 Andersson was employed at Grytviken as a carpenter, to supplement his income he also took in washing, but he also found he had a passion and talent for photography as is evident in the prints that have been made from his original plates. The camera he used is on display in the lobby of the Museum along with the case he used to carry it up the mountains and around the local area. The camera has been loaned to the Museum for the 2010 season and the case will become a permanent exhibit at the museum. Theodor Andersson’s photographs can be seen in the book produced by Stig Tore Lunde, Grytviken Seen Through a Camera Lens, available in our museum shop. 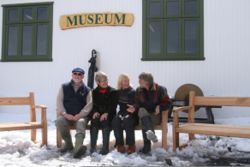 At the same time, the Commissioner was happy to pass on a gift to the island from the South Georgia Association. Theis Matzen, a wintering yacht visitor to the island, had painstakingly created three beautiful benches for the use of visitors who want to sit back and soak up the atmosphere of Grytviken. The benches were built in our own workshop and are sturdy enough to withstand the worst of our weather and I’m sure we’ll all enjoy them on our tea breaks as well!

With every ship that gets crossed off the schedule comes the realisation that time is flying past and the end of the season looms closer. 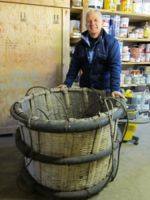 “Team Museum” keeps growing and this month we have welcomed Tony Hall. Tony arrived in time to welcome in the New Year with everyone else on base and has since been busy crossing jobs off the work list as fast as they can be added. He has painted the handrails at the front steps, repaired many of the information stands in front of the museum, attached coat hooks in the boot room and much to my delight, even made a perfect little bench to sit on while you do your boot laces up! And he makes a great cuppa and his sense of humour keeps us well entertained. 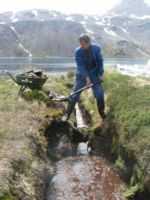 Hugh hard at work on the ditch

A major project for the summer is the maintenance and tidy-up of the cemetery. Many of the graves have started to deteriorate with concrete falling apart, gravestones coming loose and paint chipping and fading. Hugh merrily disappears each day to the cemetery armed with wheelbarrow, masonry paint and shovel and has so far dug out and drained ditches and elephant seal wallows along the boundary of the cemetery (not the sweetest smelling of jobs!), repainted many of the grave surrounds and reattached gravestones. Many graves are going to require shuttering and re-concreting.

Bridget continues to spend her time in the model room creating the ‘Made in South Georgia’ range of souvenirs. Fridge magnet elephant seal weaners, penguins and albatross are popular, as are the cold cast bronze King Penguins. She has also been experimenting with new ideas involving scrimshaw techniques on replica sperm whale teeth. 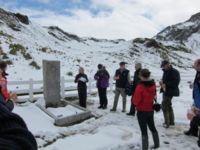 I have been getting into the swing of toasts to Shackleton, this tradition of gathering at his graveside for a generous nip of something nautical and fiery, as happened on the anniversary of his death on the 5th of January and also for some visitors to Grytviken later in the month.

We are hoping that by the time of the next diary entry the weather-god may have felt kindly towards us and sent some sunshine! We live in hope.

Although most of us enjoy and appreciate being away from the excessiveness that Christmas brings, decorating the whalers church is a South Georgia tradition and everyone on base, fortified with mulled wine and mince pies, comes together to hang tinsel and lights and decorate the tree.

Base Commander Ali Massey has put together a time lapse movie of the church being decorated. This can be viewed through the GSGSSI website at www.sgisland.gs It is really very good and well worth a look. 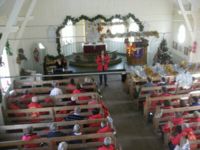 Passengers from cruise ship Hanseatic came ashore for a Christmas Eve service and everyone on base was invited to join them. It was a different experience for everyone listening to the service being spoken in German, and singing in four different languages – German, English, Spanish and Philipino.

Christmas Day dawned bright and sunny but with ever increasing winds. Hanseatic, anchored out off Hope Point, waited patiently for the wind to die, however with gusts reaching over 100mph, they decided to call off their Christmas Day landing. They were joined out in Cumberland Bay east by ships Bremen and Prince Albert 2 who had come in to escape high winds at sea. From the safety of our lounge on base, it was spectacular to watch great walls of white water being whipped up by the wind and carried across the bay. 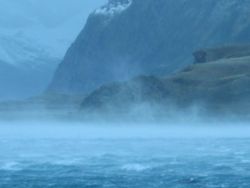 I am just reading Into the frozen South by Scout Marr who was on board Quest with Shackleton in 1922, and he writes about their Christmas day sailing to from Rio to South Georgia. He writes:

Christmas Day, down there in southern latitudes, where it was officially mid summer, dawned bleak and grey and threatening. The wind during the night had increased to a very good imitation of a real gale and the ship was showing precisely what she could do in the way of uneasy motion… A great formidable grey bearded comber swung up out of the obscurity, gathering weight as it came; it towered high, growing- always growing, then fell right a top of me, washed me clean off my feet and promised to wash me over board; but with a natural desire for a long life I clung on…By breakfast time she was heaving herself about in an unimaginable fashion, so much so that it was impossible to keep anything on the table… The Boss gave orders that the impossible was not to be attempted… and the actual ceremonial of Christmas was wisely postponed.

I can imagine the passengers here on Christmas Day could probably write much the same!

So even though we got to enjoy our Christmas dinner on base with everyone else, we had almost no time over the next few days to see anybody as we welcomed 8 ships in 5 days. It was hectic and there was no time for anything other than cleaning and restocking the shop in between each ship. The new year break was never more welcome.

Happy New Year to all our supporters!