MUSEUM ASSISTANT SUE WERNER REPORTS ON ALL THE EVENTS IN A BUSY JANUARY AT THE SOUTH GEORGIA MUSEUM.

HAPPY NEW YEAR from all of us at the South Georgia Museum.

“Now where to start” its been such a busy month!

January has been a busy month for the Museum and shop, with lots of ship visits keeping us on our toes. Some days we had two ships visit the Museum. Sarah has been giving the Habitat Restoration talk on board a lot of the expedition ships, which has been well received with lots of passengers sponsoring hectares. Hopefully we will achieve our targets and raise enough money to continue the rat eradication project. So far no rats have been sighted around Grytviken since the baiting. This is a very promising sign it is working.

We began the year with a big celebration at King Edward Point (KEP); a wonderful Chinese banquet especially prepared by the lovely Sam and Co, followed with Dr John’s “Guess Who” game in the bar that took us into the New Year. Lots of laughs and a goodtime was had by all. Although some of us nursed a sore head the next day.

The Xmas decorations came down from inside the Whaler’s Church and the builders started work on minor repairs and repainting.

Katie finally hung the Duke of Wellington’s regiment flag in the Jarvis Room of the Museum as part of her Shackleton House display. This flag originally hung from the ceiling of the bar in Shackleton House over at KEP. Katie has continued discussions with Bob Burton about the investigation of the Louise and gathered a few artefacts from the wreck for future analysis. Katie has been active with her curating and hand over to Sarah before she leaves us at the beginning of February on the Pharos SG. That will be a sad day!

The Whaling Station tours have started to gather momentum; many expedition ships have wanted them so Katie has given the tour on a more regular basis, which is great. Henrik and Sarah will continue the tours during February and March.

Hugh officially took over the Postmasters position from Sam who left on Le Boreal around the 10th January. What a busy first day it was for Hugh, with Le Boreal in the morning followed by Ortelius in the afternoon! At least it ended with a wonderful BBQ invitation on the helideck of Ortelius in King Edward Cove.

Hugh has been doing a marvellous job around the Whaling Station keeping everything in order maintenance wise, including painting and a tad of gardening around the Museum. In the cemetery Hugh replaced the cement surround on one of the graves. It was a sad day when Hugh moved out of Drukken Villa to take up his new residence at KEP, he said he would be back for a holiday!

Henrik and I have been busy cleaning up all the storerooms round the Museum and sorting out a lot of the clutter. We have also been dabbling in the South Georgia handy crafts; mainly finishing off what Tom couldn’t finish before he left. There are endless tasks that will keep us busy for the next two months.

Henrik and Sue up in the mountains.

We have also been out enjoying the beauty and wildlife of this island paradise and have done some wonderful walks around the Thatcher Peninsula.

Further afield, we took part in the fur seal puppy weighing over at Maiviken, it was an exciting day, the first of three. Alastair, the seal biologist, led a team of nine. He had to show us how to catch and record the sex, moult stage and weight of each puppy. We had to catch a total of 100 pups, 50 from the beach and 50 from the tussac. It looked easy enough until we tried it. The puppies are so cute at this early stage and weighed between 4kg to 13kg. Our next weighing will be in February and the pups will be much bigger and feistier. It was a very successful day with no one receiving any bites!!Agulhas the South African research vessel visited Grytviken during January. They were on the way south to the Antarctic Peninsula. We opened the shop and Museum for then and were able to host a few crew and scientists to tea, coffee and cakes, which were greatly appreciated.

Possession Day, 17th January, is the day Captain Cook made the first landing on South Georgia in 1775 claiming it for England. We celebrated the occasion in style at Carse House with a delicious 3-course dinner, wine and wonderful company, hosted by Sarah and Pat. It was also the day that Scott reached the South Pole only to find that Amundsen had already been there, it must have been a devastating moment for Scott and his companions.

Another night to remember was a feast of fresh tender reindeer at. It was specially caught by lasso and cooked by our two Norwegian visitors Carl-Eric and Henrik 2. They are here looking at the best means of eradicating the reindeer in the most humane way possible for the South Georgia Government. 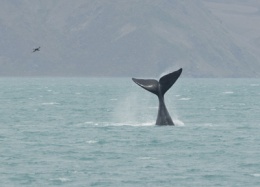 A rare treat was the sight of a couple of southern right whales in the vicinity of KE Cove. One whale was spotted in the cove by those enjoying a BBQ on Polar Pioneer. Then the next morning two whales were seen feeding just off KEP with tail slapping displays for about half an hour. We watched this show from the office windows. It has been well over 20 years since a whale has come into the cove. It is an encouraging sign that they are slowly coming back – it was absolutely fantastic!Burn’s night was an experience for us Australians, a night of Scottish poetry and haggis (offal wrapped in sheep stomach), it didn’t sound like our cup of tea but we were converted and had a really grand night.

We had some very special guests arrive towards the end of January, Chris and Siobahn Nunn who stayed with Pat and Sarah for a week. 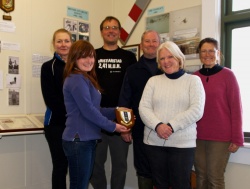 Chris and Siobahn Nunn, second and third from right, presenting the M company shield to the Museum.

Chris Nunn was last here in 1982, he was part of the British troop who liberated South Georgia after the Argentinian invasion. He was the Lieutenant Colonel, Officer commanding M Company Group of the 42 Commando Royal Marines. Chris also brought with him some interesting artifacts for the museum collection, some of which will be displayed next season in the Museum. Chris also gave a wonderful presentation of his experiences liberating South Georgia and the South Sandwich Islands from 25th April to 9th July 1982, which was very moving and personal. 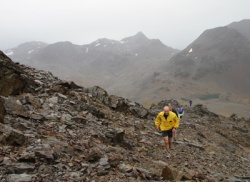 Half marathon runners at the top of Brown Mountain.

On the 30th January, after weeks and months of training, it was the big day of the South Georgia ½ Marathon! There were 21 eager participants in one of the toughest terrain races on the planet. There were several categories, walking, Nordic walking, runkling (between walking & running) and running. 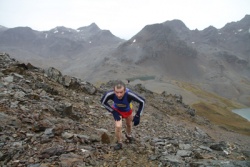 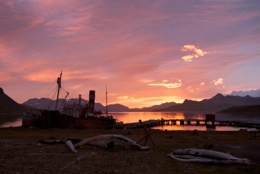 It was a lovely afternoon and a marvelous way to end my blog basking in the sunshine on the foreshores of KE Cove watching the sunset. How lucky are we! 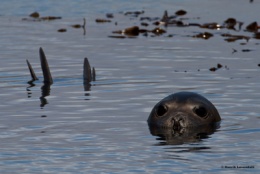