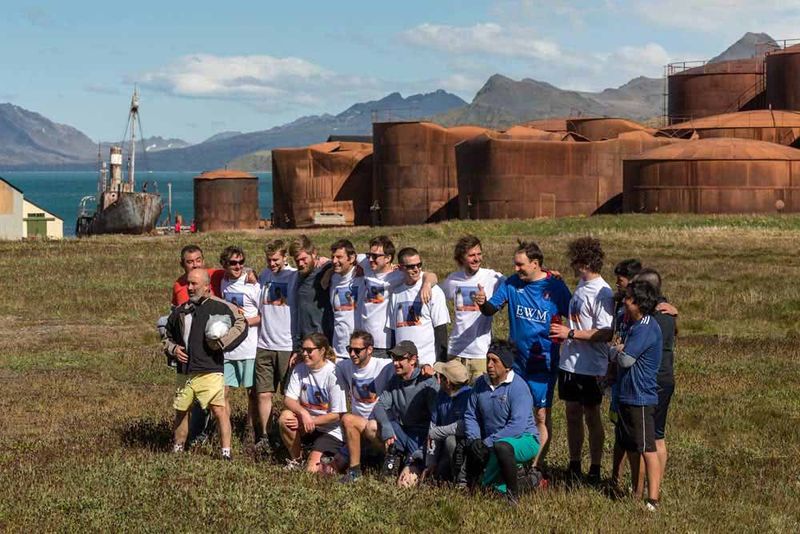 January was a busy month with a steady coming and going of expedition cruise ships. When a ship visits our little ghost-town, we offer whaling station tours and and an in-depth information on Ernest Shackleton’s connection to this place, as well as a free museum visit and a still well-stocked shop to buy souvenirs from (and at the same time support the SGHT projects). On other days, we manage to get more work done related to the running and upkeep of the museum. Last year’s Artist in Residence Theo Crutchley-Mack ‘s exhibition was successfully rearranged after having sold three of his paintings, and artefacts were sorted and moved within the Main Store.
An important new acquisition to the Museum Collection was the Argentine flag removed from the flag pole at Southern Thule in the South Sandwich Islands during the 1982 conflict in the region. It was carried to the Museum by a friend of the Royal Marine who took the flag down.

Quite some hours were spent tidying up the cemetery, as the burnet and dandelion had to be trimmed for an ‘orderly’ appearance. The GSGSSI Maintenance team did a tremendous job in restoring Shackleton’s grave, as the marble surrounds were falling apart.

Having already spent the whole of last season on South Georgia, I am able to compare those two summers to each other. The result so far: they are most stunningly different! Sure, certain things remain the same: the routine elements of my job, for instance. As a Museum Assistant I am mainly responsible for the running of the shop and the cleaning of the museum and toilets. Sure enough, it is those ‘other’ parts of the job, and of course our leisure time, which makes the stay here interesting. For instance, a couple got married here in our lovely church, which also served as a perfect location for two concerts by cruise ship musicians. Also, the season’s first football match took part on our boggy playing field, with the local team winning against a strong team from the Fishery Patrol Vessel Pharos SG.

For the museum staff it is always a very exciting opportunity to assist the BAS scientists in their work. Some of the museum team were able to take part in the first weighing of the fur seal puppies or to join a team of marine biologists on their trips into the surrounding coastal waters. They are trying to find out more about the populations of the Southern Right and Humpback whales at South Georgia and so far they have successfully managed to tag two humpback whales! In the last two weeks, the two animals have travelled very different routes; one heading to the southern Scotia Arc south-east of the island, whilst the other rounded the island and decided to spend time at Annenkov Island.

Another scientist is here to do some basic research on plastics in our water and he, also, was joined and helped by the museum team. Contrary to what you might think, micro-plastics get here with the ocean currents, and of course us humans being here (be it on ships or temporarily living here) also contributes to the accumulation of plastic even here in those remote waters. Finding out how high the pollution is can be seen as a step into tackling the necessary reduction of the usage of plastics on this island. We are trying our best, at the Museum we try not to give out plastic bags any more, have stopped the ordering fleeces (as synthetic clothing produces huge amounts of micro-plastics) and started to use filter-bags for the washing of our laundry. Besides trying to recycle and reuse as much of the incoming plastic as possible, we also keep an alert eye on the wildlife within our bay, and were thus able to find and a young fur seal which was entangled in a plastic band, which most likely came from a fishing vessel somewhere in these vast oceans. With managed to free the seal: an eye-opening experience to why the age of plastics has to come to an end, and a wonderful deed to have been part of!