Museum Director Sarah picks out a whaler’s handcrafted knife as an example of a museum object that speaks to her. 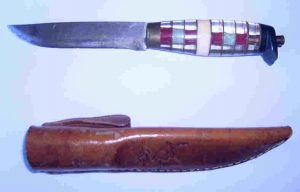 It’s a knife, a rather odd looking one with its multi-coloured handle, but it’s just a knife right?…. Look closer and you may see, like me, how this knife tells so many stories.

The knife belonged to William Mackay. William says that when he was young, every boy had a knife. And as a young man, young enough that his parents needed to sign papers to enable him to go, William signed on with the whaling company Salvesen for a job on a whale catcher ship. He sailed south to South Georgia on the Southern Harvester to join his ship.

In that first season William circumnavigated the Antarctic before his vessel called back to South Georgia where he volunteered to overwinter at Leith as a Mess Boy. That first winter sounds like it was a harsh one with deep snowdrifts and, in the steep sided bay, no sun in the station for months. He must have liked it as he went on to winter twice more…

In their limited free time many whalers made craft items out of whatever materials were available to them. Williams project was to refashion the handle (or maybe it broke) on a bought knife. Casting about for materials he came up with bakerlite (an early form of plastic) for the black end piece, Perspex for the clear sections, and whale tooth for the white section in the middle. For added decoration he coloured the inner shaft to show through the Perspex.

William donated his knife to the Museum in 2011, since when it has been displayed with other whalers’ crafts in the Larsen Room. When I look at the knife I enjoy it as both a practical item and for its artistry and attractiveness. In my mind’s eye I can curve the thickened, weatherworn, hand of a whaler around that colourful handle.

In researching for this, I fell across an oral history by William at the Wicks Society. In it he tells us more about his life as a whaler and mariner and he recounts and sings a song I have never heard before. It rhymes better in a Scottish accent!

If you are fed up with life and you want to leave your home,
Just go down to Bernard Street my friend and give Salvesen your name,
They’ll send you to an island,
By God it is a beauty,
And all you’ve got to do…
…is do your bloody duty,
Singing oh dear me,
What will I do If I fell out the …….

I have listened to William singing his ditty a good few times, but for the life of me I cannot work out what the last few words are, but he finishes singing with a chuckle!