From Prey to Protection exhibition

A number of artefacts from the South Georgia Museum are currently on display at the Cold Spring Harbor Whaling Museum in Long Island, New York. The artefacts are on loan to the institution as part of an exhibition entitled From Prey to Protection. The exhibition draws on a range of artefacts, historic film and audio and a variety of graphics in order to explore the changing views of whaling.

The exhibition will run until September 2011 and further information can be found here.

The artefacts on loan include a whale mark from the Discovery Investigations. Whale marks were used to study the migration of whales. They were fired into living whales in the hope that they would be recovered later when the whales were harpooned. 5,350 whales were marked between 1926 and 1939, but fewer than 400 marks were recovered. However this was enough to give valuable information. Other artefacts include a logbook used by C. A. Larsen who established Grytviken whaling station in 1904. It was used to record cargoes of whale oil. 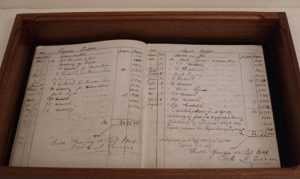