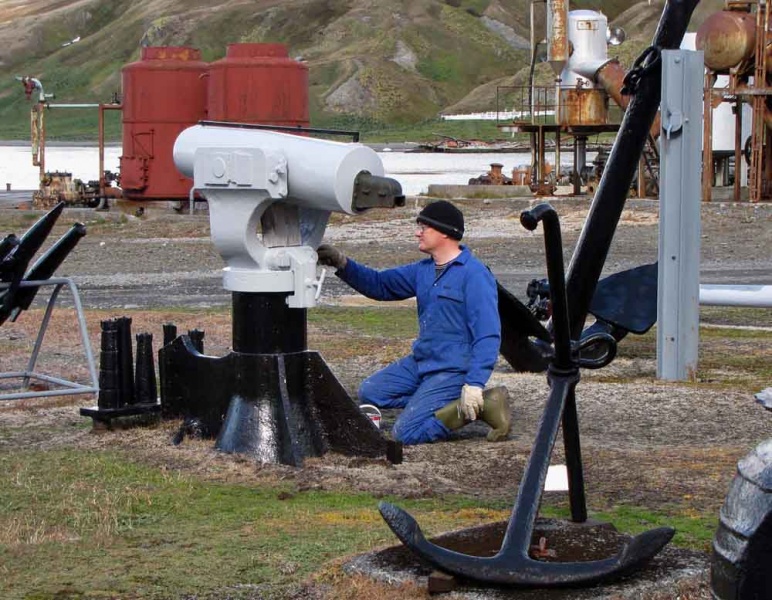 (Redirected from Louise survives another storm and it is goodbye to the museum team.)

The summer tourist season is tailing off, with five cruise ship visits in March and just a couple more to the end of the season. The last one will be Plancius on April 7th. That means our focus changed to finishing off some the projects we had started and starting to get ready to winterise the Museum until next season. The Museum is still available for winter visitors, just no water or heating!

The remains of the sailing bark Louise. 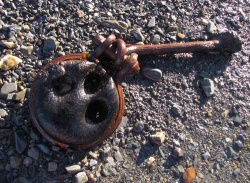 The deadeye from Louise. 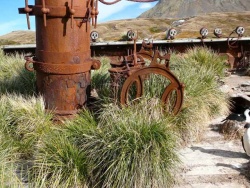 Deadeyes on the rail of Bayard.

A big storm in early March caused timbers from the wreck of the sailing bark Louise to break off and wash up on the nearby beaches. Closer to the wreck, this deadeye was found – these were usually made of lignum vitae and were used to secured the shrouds. A row of them can be seen in the photo taken aboard Bayard in Ocean Harbour. Apparently they are called deadeyes because they look like the eye and nose holes in a sheep skull! We continue to try to progress with survey work on Louise before she totally breaks up, but have been unlucky this summer with poor underwater visibility, and things like boat breakdowns when survey work was planned. 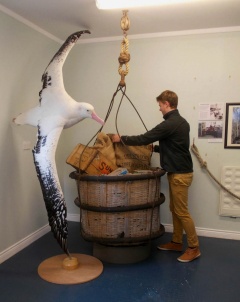 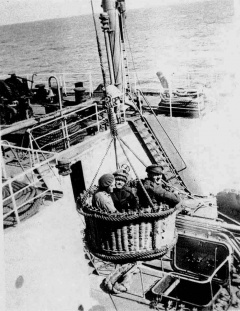 Whalers moving between whaling ships at sea in a similar basket.

The main museum team left on March 14th, but before they left Curatorial Intern Thomas installed the transfer basket in the Carr Maritime Gallery. These were slung from a ship’s davit or crane to move men and stores between vessels alongside each other. A modern equivalent is still used today.
Good weather days in March were used to try and finish work on the artefacts outside the front of the Museum. Gemma and Sarah were painting and oiling every spare moment, but the really big task, to strip the paint off the Albatros mast, has taken many weeks and was only just completed at the end of the month. If we had known what a huge task this would be I wonder if we would have started! We had to clean off all the old paint and primer which had been holding moisture into the wood, then apply layers of woodrot treatment and preservative, and then layers and layers of oils. 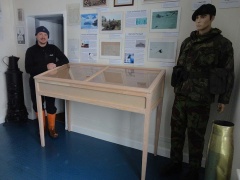 Meanwhile Darren was spending every moment he could in the workshop creating a new display case for the refurbished Jarvis Room military display. He was justifiably proud of his work, and the case was installed in the room and the artefacts that will be displayed in it have been temporarily put in place as it obviously still needs to be painted and varnished…a job for next season’s team!As a last hoorah the team organised a community rounders match on the old whalers’ football pitch, followed by another of those blustery barbecues. We all quaked when “Slugger Joe” (KEP Electrician) was batting as he thumped the ball to the end of the pitch once again, and we all finished up with balls of burr heads from the burnet sticking to shoes and clothes. 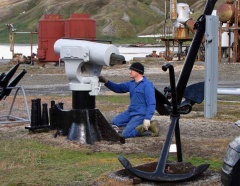 Pat painting the whaling cannons in the front of the Museum.

So with the main museum team gone, we were glad to get the help of volunteer Pat. Married to SGHT Director for South Georgia Sarah, he decided to stay on and help for the last five weeks instead of heading out to the UK ahead of her. He learnt quickly as there was a ship visit on his first day, but with his help the Museum is still able to offer Whaling Station Tours and the Habitat Restoration presentation to the visiting ships. He has proved very handy at mending things, and has started a major clean-up of the vast main workshop.The folks from the SGHT Habitat Restoration Project (rat eradication) drop in from time to time by helicopter and several have stayed over in the museum accommodation building, the Bunkhouse, when all the beds in Larsen House at KEP have been full. It is a great chance to catch the latest news of this huge and ambitious project; sharing frustrations over uncooperative weather, or celebrations as another area has been baited. The main museum operation will shut down in a fortnight now, but the rat team are due to stay out there in the north of the island baiting for weeks yet!