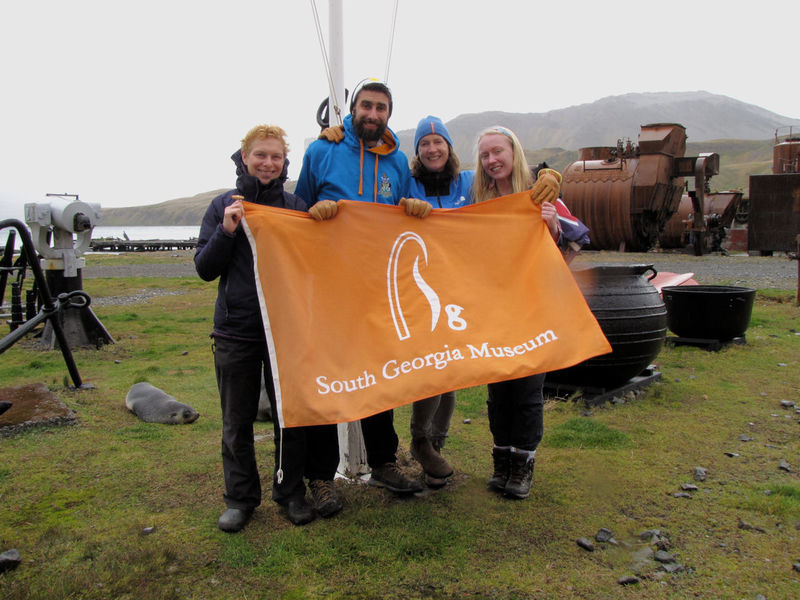 It was a different end to the season than anticipated; the Covid19 pandemic affecting even the most remote areas of the world.Working life was normal as March started. For the first ten days we had a busy ship schedule that saw eleven cruise ships, a research vessel and a Royal Navy ship visiting. And the race was on with the increasingly wintery weather to try to finish outdoor maintenance projects. The V Tipper truck, originally used to move materials around the whaling station, had been stripped back to bare metal and urgently needed painting before the winter closure, else rust would take a toll. Jerome and Hannah used every spare moment, and few more besides, to ensure it was indeed protected and looking great before we left.

Increasing concerns that Covid19 might reach the Antarctic bases, and the South Georgia Government’s support of efforts to ensure this did not happen, meant a rapidly changing scenario for us on the ground. On March 13th it was announced that no further cruise ships would visit Grytviken this season. We immediately switched into close-down mode, making preparations to winterise the buildings, putting displayed objects away to keep them in the best conditions over winter, and taking down two exhibitions ready for new ones to go up at the start of next season. We also took off display the two superb oil paintings of the Antarctic region by renowned South African artist Peter Hall. We had been raffling these to visitors throughout the season. They have now been posted to the lucky winners in Australia and Finland.

On March 14th we were told that we would be leaving early; so now it really was a race to get as much done as we could before we joined the ship on the 18th. The team did brilliantly in the circumstances. And there was a bit of time for other things too. Jerome, who first worked for the South Georgia Heritage Trust as a chef on the Habitat Restoration Project, did a presentation about the project and his experiences for the local community. And those who had already made a wind powered craft were still able to join in the annual Gull Lake Regatta….always good fun. One of the last jobs is to drop the flags, signalling the end of another successful and busy season.

And then, what a send-off for us and the others leaving. On the day we left there was a huge treat of wood fired pizza for lunch then, as the launches set out from shore to take us to the ship in the bay, flares went off, and it seemed everybody was out to wave us off. We even had a memorable wave from the digger bucket of the 50 tonne digger working at the quarry half way round the track. There were few dry eyes amongst us.
The Pharos SG was continuing with a busy programme of work, including checking rodent monitoring devices at Gold Harbour, so it was a huge treat to be allowed also to go ashore at this spectacular site with its hanging glacier and plethora of wildlife. Then fortunes changed again and suddenly the ship was racing back to the Falklands to attempt to get us onto what was billed as the last flight back to the UK via Sao Paulo, Brazil. The journey home had felt touch and go, and so we were grateful to reach Sao Paulo and there enjoy a beer and a last meal together ahead of the final flight to the UK.

Whilst on the island Museum Assistant Hannah had been very involved with a small group of musicians and singers and even wrote her own song ‘Loving South Georgia’ which she set to the music of ‘Cha till mis a’seoladh’ (SG whaling song). On the coach home to Wales she wrote a new verse:

We had to leave early to get us back home

Back on the Pharos and off on a cruise

But the joy of Gold Harbour was only a ruse

As through hurricane winds we then rocked and we rolled

Steaming for Stanley and a plane, we were told

Then a day in the harbour but finally all calm

We saw trees and roads and a dog and some farms

Then on with our masks and our gloves and hand san

And into this new life where coughing is banned

Three airports, one beer, some films and some zzzzs

But all we really wanted was a nice cuppa tea

Then back to our loved ones in this crazy new land

All with stories to share that are hard to understand

From seals and penguins to a beer-named virus

Want to try singing it? You can hear the tune for the song at the link below, but we suggest you speed it up! https://www.youtube.com/watch?v=CmrjuYPAfpk

See you next season……the Museum Team