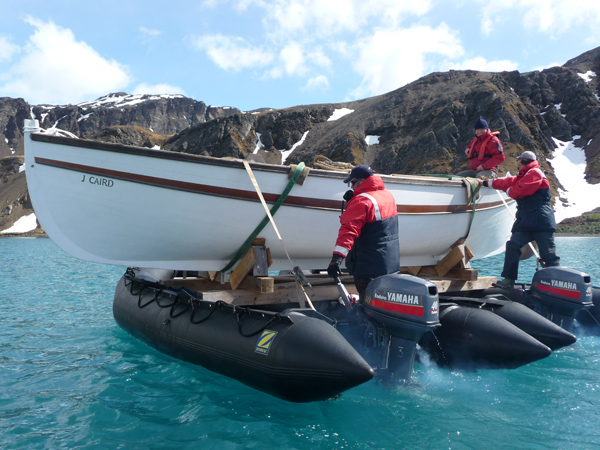 Last Thursday saw the arrival of the James Caird replica which will now become one of the star attractions in the new Carr Maritime Gallery. The gallery, which is situated in a former workshop adjacent to the Museum, will also display information on the vessels around South Georgia and a fabulous new Wandering Albatross specimen created by Steve Massam. 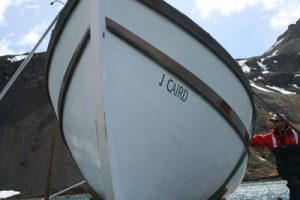 The replica was accompanied by Bob Wallace who built it to take part in the filming of the Shackleton IMAX film in 2000. The boat was purchased by SGHT thanks to a huge level of support from U.S donors and Quark Expeditions.

It was a glorious day with brilliant sunshine as the cruise ship Shokalskiy brought the ship in atop two zodiacs. Ainslie, the General Manager, and myself went out on a zodiac to meet Bob Wallace and the James Caird where we got some fantastic photos and film footage. Once on land the boat was picked up by Morrison Construction who guided it carefully to the Maritime Gallery. The James Caird was then part rigged by Bob and there was an opportunity for all the cruise ship passengers to take part in a team photograph. Morrison Construction and the Museum team then moved the boat into the gallery the following day where it will go on show shortly.

A great big thank you to everyone involved in helpng us here at the Museum on what was a very exciting day for the whole team!