At the end of October the museum team were given some basic medical training from Sam, the British Antarctic Survey doctor. The morning heard a lot of laughter as well as some serious work, injecting an orange and learning how to deal with a variety of injuries.

We all had a lot of work to complete before the arrival of the first cruise ships of the season. The JCR arrived with the year’s supplies for the base, and after a hard working afternoon for the BAS team, we all attended a great bbq. The museum team had been asked to supply cakes for 84 people. 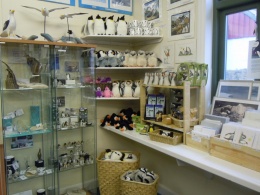 On Tuesday 1st November we had the NG Explorer in early, and after a manic couple of hours in the shop, we went on board for lunch. Fantastic food and a rewarding mornings work. Sarah gave the Habitat Restoration talk, which was well received and resulted in several donations. Back on shore that afternoon we prepared the shop for the arrival of Ocean Nova. Then followed another manic few hours in the shop. Lots of work but had some very funny moments.

Early November we saw some hot and sunny days, and enjoyed lunch outdoors. We attended a bonfire on the beach on Guy Fawkes Night. Katie was very busy preparing displays about Frank Wild in time for the interment and Tom spent time making South Georgia Island crafts. I was occupied solving chip and pin problems in the gift shop. Sarah joined the team as SGHT Director, South Georgia in the middle of the month and is now familiarising herself with all aspects of the museum and shop. 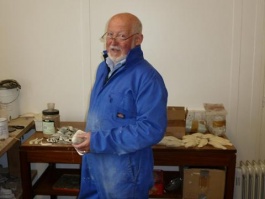 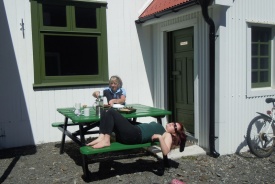 Liz and Katie enjoy the sunshine and al fresco lunch

There was a 60th Birthday party for one of the crew from the FPV Pharos, and a fancy dress party, animal theme, for the Docs birthday. The museum team dressed as rats, what else could we have done?? 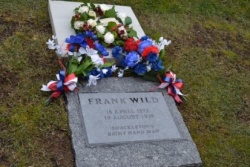 The highlight of month was the arrival of Frank Wilds ashes, which were laid to rest in Grytviken cemetery. The service in the church was well attended, with family members, visitors and crew from the ships. Also the BAS team who are based on the island. The museum team put a lot of time and effort into organising details, to ensure that the day ran smoothly for all concerned. We also prepared the ground for the interment. The event was well covered by press and will be televised around the end of March on BBC 2. Traditionally, cruise ship passengers raise a glass to Sir Ernest Shackleton during their visit to the cemetery. After Frank Wild’s memorial stone was laid in place it was quickly doused in whisky, as the first of many similar toasts was made to this great explorer.

Several cruise ships later and we are still standing!! We have all enjoyed evenings on board the cruise ships, fundraising and meeting some very interesting people. Tom managed to get a trip out on one of the jet boats. He photographed a glacier as it was calving and falling into the sea. We also had an evening socialising and playing a table tennis match in the boathouse. This weekend and another party, this time for Katie’s birthday, which I am sure we will hear more of next month!

The time has passed so quickly, and I can’t believe that Tom and I will be heading home in three weeks’ time. It has been hard work, but interspersed with some magical moments. We will miss this amazing place, which we are privileged to have been part of, but are also looking forward to seeing the family again.