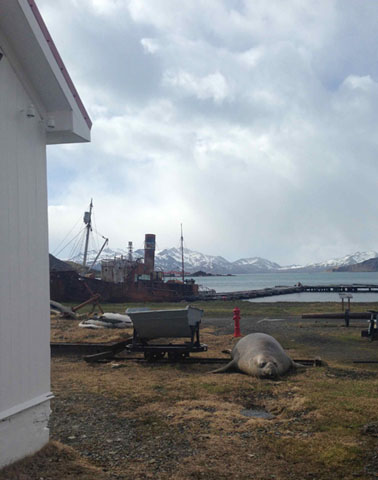 GETTING GOING FOR THE NEW SEASON

It has been almost exactly a month since I, Suzanne, and our two Museum Assistants, Josie and Kris, arrived at Grytviken. It was a long journey down – one which involved a day’s drive from Dundee to Oxfordshire, two 9 hour flights, three days in the Falklands and, finally, four days on a naval warship – but it’s safe to say that, so far, it has definitely been worth it.

Life on the island is very different to that in Dundee. For starters, our arrival brought the number of inhabitants up to the grand total of twenty; which is far removed from the time I spent living in London! Our fellow South Georgia inhabitants are a mixture of British Antarctic Survey staff (BAS), Government Officers from the Government of South Georgia and the South Sandwich Islands (GSGSSI) and a team of builders here to do construction and maintenance work over the summer. I’ve never lived in such a small community but everyone has been extremely welcoming; we’ve had numerous invites to dinner, invitations to movie nights and have accompanied BAS staff on their travels to the coast on the other side of the peninsula we live on, to Maiviken. On these trips I’ve been sure to bring my camera as South Georgia is, unsurprisingly, far more picturesque than Dundee. 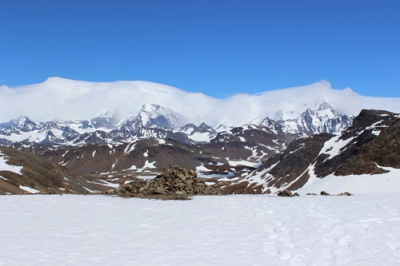 One of the rather spectacular views on South Georgia. The cairn is affectionately known as Dead Man’s Cairn, how charming

Coming closer to home, our ‘neighbours’ are also infinitely preferable to those in the motherland. Where my sleep was once frequently interrupted by the noise of student parties, I am now only occasionally awoken by the odd bull elephant seal roaring through the night. Opening my curtains in the morning and seeing the local wildlife is a novel experience, to say the least, and is one that I’m sure I won’t ever get bored of. 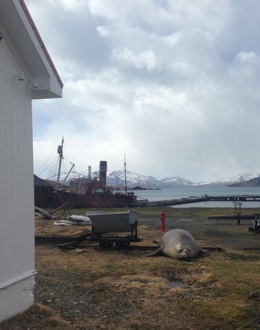 A neighbour, creeping uncomfortably close to our house

Unlike London, the commute to work is short, very short indeed, and work is most enjoyable. I can’t speak for the others, but I feel like we’re really getting into the swing of things. My role here is that of curator and I have a list of projects that I’ll be working on, some of which are currently underway, so I thought that this is a nice opportunity to highlight some of the things I’ve been up to so far.

We’ve had a very busy start to the season with visiting cruise ships and as visitors often have a limited time here, the South Georgia Museum is keen to offer as much as we can. I started with developing and writing my museum tour, which is a short 20 minute tour of the museum highlighting the theme of each gallery and the interesting objects housed within. For me, this was a really great opportunity to get to grips with and learn more about the collection. Next, I researched and developed my whaling station tour which, as you may have guessed, is a tour of the whaling station. As you would expect, after researching this tour I have come away with a much greater understanding of how the whaling station operated and what it was like to work here, for example, did you know that it was possible to flense a fin whale in only 25 minutes? I certainly didn’t!

When we’ve not had cruise ships or yachts in I’ve also been working on my on-going projects, one of which is an exhibition celebrating the centenary of the Church here at Grytviken. I’ve been busy carrying out background research, deciding what themes the exhibition will cover, investigating our collection to see what material we have available and sourcing images from external contributors. This research has taken me into the depths of our archival material, up a rather shaky looking ladder into the dizzying heights of the Church’s bell-tower and into communication with archivists thousands of miles away in Norway. Not quite your average working day, I’m sure you’ll agree. All being well, the exhibition will be up in mid-December in good time before the centenary of the Church’s consecration on December 24th. 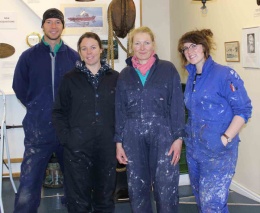 In addition to this, I have also been responsible for overseeing the annual deep clean of the museum. This is quite the undertaking – cases are opened and objects are moved – so we have to time it for when we have no visitors. We were able to take advantage of two days break between cruise ships and, between the four of us, we managed to complete five rooms. Only another three to go! I particularly enjoy doing this as it means that we are getting up close to the objects and artworks on display; this is a great opportunity to really look at the objects that you might have just glanced at before and maybe learn something new about them.

So yes, that’s just some of the projects I’ve been working on and they’re just the tip of the iceberg! Over the new few months I’ll be creating new displays and updating existing ones, researching and curating a Shackleton exhibition for another centenary, and continuing to document the collection, amongst numerous other tasks. In short, plenty of things to keep me out of mischief!