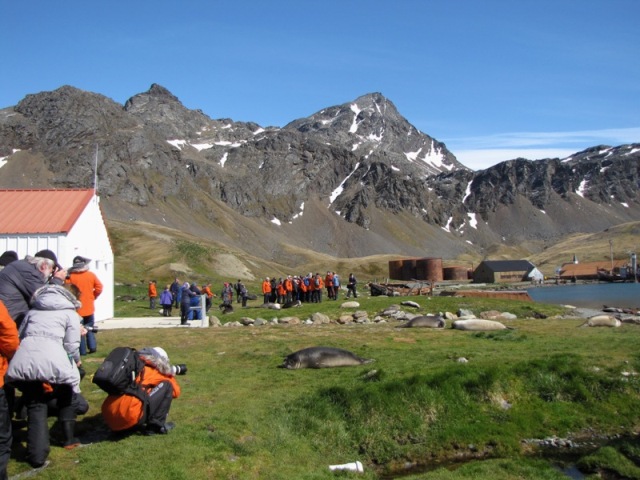 VICKIE ON THE INVASION OF THE WEANERS 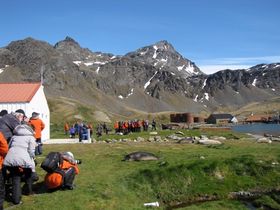 We’ve just come to the end of our busiest month to date at the museum and it’s been a whirlwind – 22 cruise ship visits in one month! There’s been;

We’ve all settled into our jobs at the museum and it’s great to start seeing familiar faces returning on the ships’ staff and sharing tea, cakes and stories in the staff room.

‘The Freezer of Dead Things’ 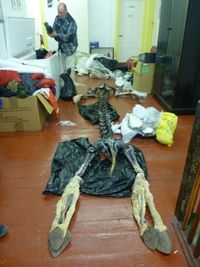 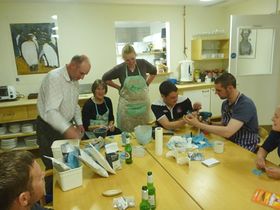 After creating a new water-effect base for the wandering albatross in the Carr Maritime Gallery and running a fun craft night for all at the base, Steve Massam tackled the ‘Freezer of Dead Things’. It was fascinating going through the various specimens stored for possible taxidermy and future museum display. Collected from the scientist at KEP or Bird Island or from animals that died from natural causes, the collection includes King, Gentoo and Chinstrap penguin, as well as Kerguelen, South Georgia Diving and White-chinned Petrels and the odd fur seal pup. The remains of a large bull elephant seal (see above) were a great challenge to piece together with only the skull so far making it into the display in the Prince Room downstairs.

Invasion of the ‘Weaners’ 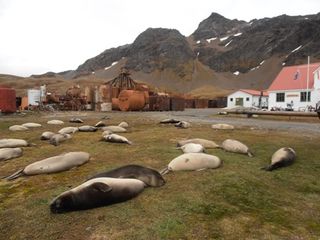 The weaners are taking over the museum forecourt. We think a group of weaners should be called a “cuddle” 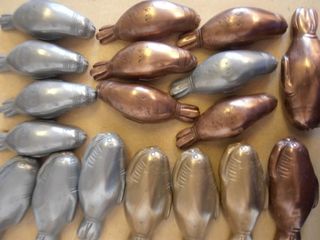 A cuddle of weaners which we make for the auctions.

With all the cruise ships coming in we’ve had little time to explore the wider area around Grytviken so far. But, no matter – the wildlife is literally on our doorstep here. The weaners(young elephant seal pups) have been out in force on the grass in front of the museum for the last few weeks. Their days seem to run pretty much like this:

• Sleep and snort in comfy companionship throughout the day

• Wake up as the light fades and play in the shallows

• By the full light of day go back to sleep again.

Inspired by this Jo and Danielle have been busy making limited edition bronze and copper ellie pup models. These sell particularly well in the cruise-ship auctions which have gone brilliantly this last month. We’ve had fantastically generous donations and some great fun nights – massive thanks go to all those supporting by buying at auction and particularly the ships’ Expedition Staff for running them.   Fur Seal Take-over

Soon the weaners will be off and it will be the turn of the fur seals to cover the station. The big males have been holding their territories on the beaches for a good few weeks now and it’s only in the last two weeks that the females have started to turn up and give birth. ‘Track Corner Boy’ is doing particularly well with 10 ladies and pups in his harem. Whereas ‘Big Boy’ on the landing beach has yet to score a girl but we’re hopeful for him! The terns are fledging chicks also and it’s been great to record a couple of pipit nests at King Edward Point. Records of pipit sightings are coming in now from all over the island and giving us great hope that the Habitat Restoration Project has been a big success. But we will only know for sure when we complete the monitoring phase in early 2018; so we continue to raise funds and look forward to that. 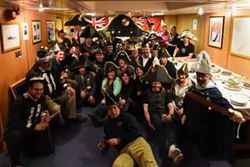 Trafalgar night was hosted on board FPV Pharos SG. Hats were obligatory

Over at King Edward Point the handover has taken place with the new BAS team arriving and the old winterers passing on their knowledge before heading off on the RRS Shackleton at the beginning of December. It’s always sad to see good friends leave but great to get to know the new faces. As part of the goodbyes and welcomes we’ve had a ceilidh in the church, race night courtesy of the builders, Trafalgar Night on the FPV Pharos SG and lots of delicious meals and social evenings around the bay at the KEP station. Next it will be time for the Xmas and New Years’ celebrations to begin!