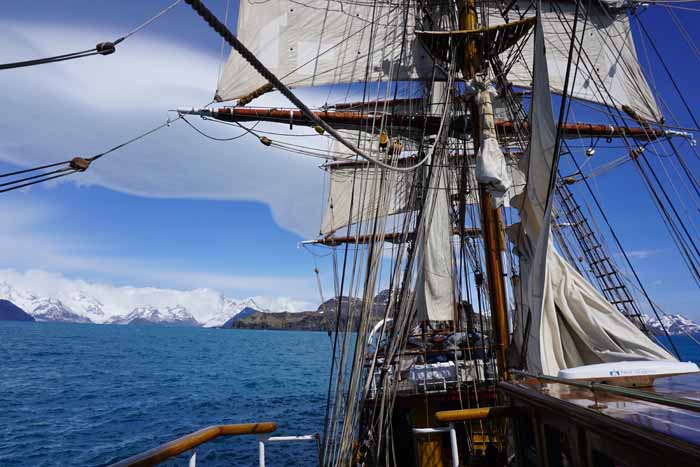 Fundraising Assistant Dani Spreitzer writes about the start of the season training and some fun opportunities for the Museum Team in November: 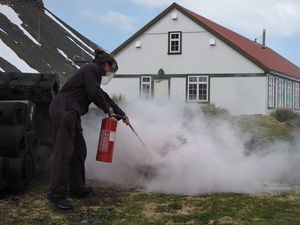 After all the preparations getting the shop and museum ready following our arrival to the island, the team hit the ground ready for one of our busiest months of the season. We started the month with a variety of training required to live in this remote and isolated community. We received first aid training from the base doctor, learnt theoretical and practical firefighting skills and, in anticipation of the busy fur seal breeding season, we received fur seal training from the British Antarctic Survey higher predator biologist. 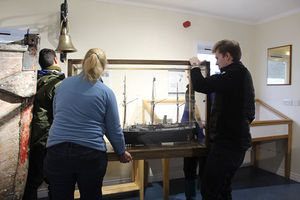 The Endurance model which arrived late October was carefully biosecured and great care was taken to transport it from King Edward Point over to Grytviken. The entire team was delighted and also quite relieved that the delicate model and glass case successfully made a safe journey along bumpy and snow covered track to the museum. The beautiful scale model made by Ken Greenwood is now being temporarily displayed in the Carr Maritime Gallery and is a fantastic addition to our collection.

The museum team held an event early in the month for the locals to celebrate the opening of the museums latest exhibition from Artist in Residence Theo Crutchley-Mack. The team from BAS and GSGSSI folks also came for shopping as the giftshop is now fully stocked. The lure of cakes, homemade biscuits and tea was an incentive for the wintering team, who are soon to leave the island, to drop by and catch up with us. We also attended a Remembrance service in the church arranged by the crew from HMS Clyde, followed by a very large crowd stopping by for tea and coffee and filling the entire museum staff room and using every mug we had! 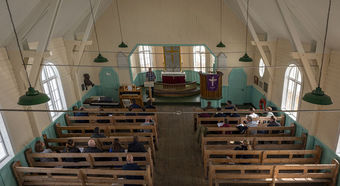 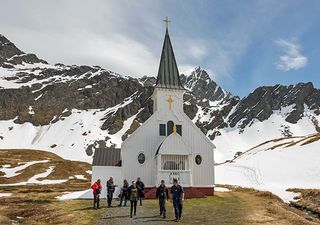 Heading for the Museum staff room for coffee after the service 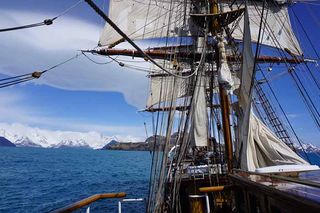 The view from onboard the Bark Europa

We had a variety of cruise ships coming to visit us this month as well as other vessels such as small private yachts and the historic tall ship Bark Europa. As she has done in previous years, the crew of Bark Europa were kind enough to invite us on for breakfast and a sail from Maiviken to Grytviken, which is always a great experience. Another highlight this month was a visit by Antarctic explorer Captain Robert F Scott’s grandson, Falcon Scott. Falcon was the onboard artist on Sea Spirit and during the all-day visit to Grytviken held an outdoor art class for their passengers to draw the whale catcher Petrel. As the museum was quiet, three of the museum team were able to join the class.
Drukken Villa, the living accommodation for the SGHT team next to the museum, finally welcomed its other team member Dani. The Bunkhouse was not large enough for the whole team, so the GSGSSI builders have been busy converting our workshop into a new residence known now as ‘The Cabin’. Sarah the Director moved in there and then Dani moved over from KEP so now the team is officially all living and working within the old whaling station at Grytviken. The builders will soon section off part of the large store, nicknames ‘Olafs’, to create a new workshop. The season is in full swing now, the snow is melted and the team are looking forward to enjoying a great summer season ahead! 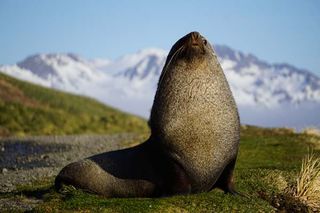 The fur seal males like this fine bull have taken up residence, guarding their patch of beach, or in this case a section of the track to King Edward Point, ready of the return of the females.