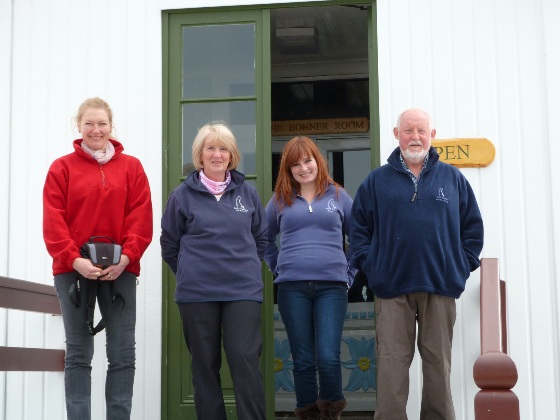 After a pleasant sail from the Falkland Islands the new Museum team arrived at King Edward Point on Friday 30 September. Liz Adams, buyer for the gift shop and museum assistant, and her husband Tom will be here for the first half of the season. They are joined by curatorial intern Katie Murray who will also be here for 3 months. I am here for just over a month and have been working as a museum assistant, helping with the busy first few weeks of the season. It was lovely to see the deep snow, but it certainly made things difficult – usually luggage is taken round to the Museum at Grytviken in the big bucket of the BAS digger, but as the track between KEP and Grytviken was blocked with snow and a couple of small avalanches, we had to put it all onto one of the jet boats to go over the Cove to Tijuca jetty, along from the front of the Museum. From here we had to load it onto small blue plastic sledges and ‘manhaul’ it all to our new home, Drukken Villa – which was warm and cosy, thanks to Matt, the BAS Facilities Manager. But we weren’t to stay in it that night as we had been invited to a barbecue back on FPV Pharos, and to stay in our cabins that night to save fighting our way through the snow in the dark.

On the following Sunday, Sarah Lurcock, who will shortly become the new SGHT Director South Georgia and head the Museum team, skied over to Grytviken with mail, biscuits and champagne – what a welcome! Sarah is currently the postmistress at KEP and is married to Government Officer Pat Lurcock. She has lived here for many years, knows South Georgia inside and out, and loves the place, and although not yet even in post, she is helping us all get the Museum and shop up and running for this new season.

Once settled into the Villa, we then had to walk back to King Edward Point (KEP) along the beach to check through all the stock in the biosecurity store for alien seeds and insects, sorting through every item and making sure earwigs weren’t lurking in any of the boxes. These had to be packed up again, and transported over to the Museum again by jet boat and sledged precariously to the Museum itself.

This was followed by days of sorting through stock for the shop, counting postcards and folding t-shirts, as well as the deep clean of the Museum, before we welcomed our first ship of the season, HMS Clyde. The Commissioner of GSGSSI, Mr Nigel Haywood, was on board for his first visit to South Georgia, and the following day the Museum team invited him to lunch of soup, fresh bread and cheese in the Museum kitchen, along with Richard McKee and Pat Lurcock. HMS Clyde left Grytviken for around three days on patrol along the coast of South Georgia with Liz, Tom and Katie from the Museum on board. Apart from struggling with the naval immersion suits when being ferried ashore, they all had a wonderful trip and were lucky enough to visit St Andrews Bay, Stromness and Fortuna Bay.

Our first yacht – Shag II – arrived at Tijuca Jetty on 9 October, with her skipper and a passenger, both Frenchmen. Shortly afterwards, Dion Poncet, a very regular visitor to South Georgia, came in with his new boat Hans Hansson â and while Katie and Sue went over to welcome them, their passengers came over the mountain ridge behind the Museum and skied down the very steep snow-filled gully, through the whaling station, to the jetty. Dion had put them ashore further round the coast earlier that day. Pelagic Australis was another visiting yacht whose passengers had earlier accomplished the Shackleton crossing, with Skip Novak and Stephen Venables. One member of their group inadvertently did the ‘Shackleton slide’ after slipping at the top of the long slope!

But the very first cruise ship of the season, Plancius, arrived on Sunday 23 October, after a slight delay when they anchored in Stomness Bay and their anchor caught on a very old, heavy mooring chain on the sea bed, which took a couple of hours to remove. They were delighted to spend time in the Museum and then move into the shop with its new stock and eager shop assistants! By now, most of the snow around the whaling station had thawed out, except the deeper drifts, and the interpretive signs had been set out, so we were ready for business. The Expedition Leader on Plancius invited everyone at Grytviken and KEP on board for a barbecue in the evening and we had a lovely time meeting up with their passengers whilst tucking into salads and fresh fruit!

We have all been delighted to take time in watching the huge male elephant seals and their harems, and now the furry black pups, and in the last few days some of the mothers have left their pups (now weaners) on the beach and returned to sea until next year. How they manage to go from skinny black pups into large grey torpedo-shaped weaners in just three weeks is amazing, and now they will lie on the beach, occasionally venturing into the shallow water to play, until they are ready to head off out to sea sometime in the New Year.

Only a few fur seals have come ashore by now and fortunately they are fairly calm and have not started battling it out to win the females yet. There are a group of king penguins beginning their moult beside the Villa, and the odd gentoo penguin wandering around lost. Spring is definitely in the air and the sea birds are beginning to pair up and display ready for the nesting season. It is exciting to think that they will be allowed to nest in peace now that Phase I of the rat eradication programme has been carried out in the area around Cumberland Bay and all evidence of rat activity has gone. But it will take two years of monitoring before we can be sure that the project here was a success, although we are hoping that the beautiful little South Georgia pipit will start nesting around Grytviken once again and we can hear its lovely song … then we can be sure the rats are gone!