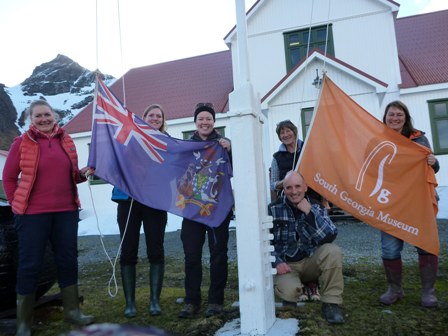 DANIELLE IS BACK AND READY FOR THE BUSIEST EVER MONTH

There was little snow left by the time we got back

Another season has begun and what a season it will be.

Prior to departing for South Georgia, a night in Stanley was arranged for current and past individuals who had either worked or visited South Georgia, from Government officials, to SGHT team members, builders and ship crew. If that night was anything to go by, it is going to be a brilliant season…

Danielle, Steve and Edmund Simons, the SGHT Heritage Director, were the first to sail to South Georgia on the HMS Clyde, a British Royal Navy ship. A day later, Vickie, Lorna and Jo departed on the Pharos SG. Both ships were lucky with calm seas, and there was ample food and plenty of time to process the adventure that lay ahead.

Upon arriving, Lorna’s first impression was the cold temperature but lack of snow and the size of the museum with it being much bigger than she expected. She spent the first month becoming acquainted with her new position as Curatorial Intern, learning and leading tours, redisplaying items from winter storage and rearranging the whalers bunkroom with Ed, to make it look like the occupants were still living in it.

Vickie is very excited to be living at Grytviken, and is amazed at the thought of knowing when the visiting cruise ships leave, she will remain with only a few others. Vickie, working as the Volunteer Fundraiser, knows that she will only scratch the surface trying to learn about the history and wildlife as there is so much to devour and is thrilled to be a part of such an ambitious and ground breaking project as the SGHT Habitat Restoration Project. 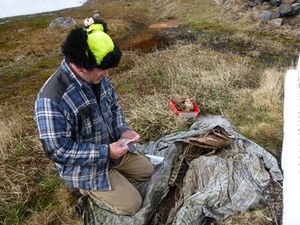 It has been six years since Steve Massam, the Taxidermist/Artist in Residence, was last here and although mostly unchanged, he was impressed by the greater amount of birds, especially Pintails and Snowy Sheathbills present. Throughout October, Steve completed his main project of creating a base for the Wandering Albatross in the Carr Maritime Gallery which looks stunning. He completed maintenance of the taxidermy collection, looked at and ended up cleaning the Spectacled Porpoise skeleton and was a mentor for the team in the making of South Georgia Island craft range.One of the Museum Assistants, Jo, remarked “Compared to working on Port Lockroy, it’s like a holiday!” The sheer pleasure of running water, heating and a separate bunkhouse to live in for the season was the basis for this comment, and after two seasons working there, she has been rewarded with a season here. Jo was surprised by the lack of snow and it not being as cold as she expected upon arriving, however, has already fallen in love with the elephant seals which are incredible and so gentle.

Danielle, returning for her second season, noted an increase in bird life around Grytviken but at the same time, felt a sense of emptiness around the station. It was only when she realised that the wildlife was missing in early spring and that was what caused this feeling because when she left at the end of last season, fur seals were abundant. The station is slowly reviving with the weaners and fur seals returning.

November will be the busiest month ever though the expected number of cruise ships for the whole season is similar to last year. We greatly appreciated the help of the GSGSSI building team to move the big piles of cargo from the biosecurity shed around the bay and up into the Museum. The Museum Gift Shop has been rearranged and now has lots of new stock ready for the season ahead.

The Museum has been de-winterised, the heavy stainless steel interpretation signs are out, the flags have been raised and the open sign has been hung for what will be another memorable, educational, inspiring, social and life changing season. 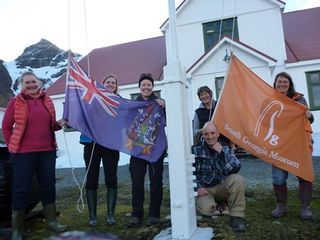 Raising the flags to start the season 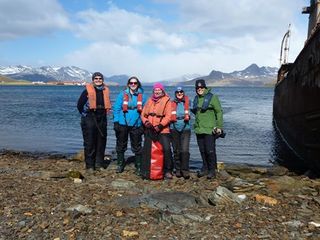