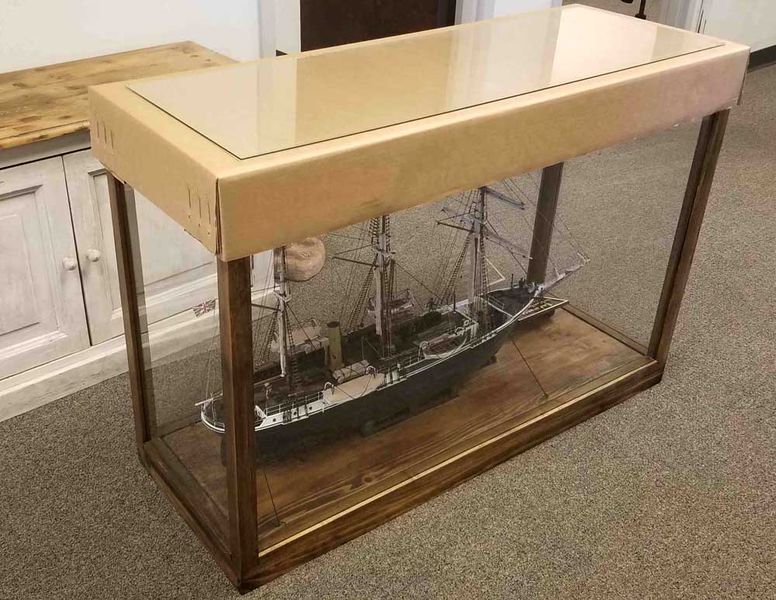 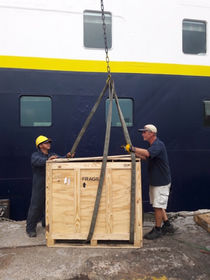 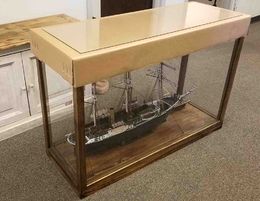 The model of Endurance that is inside the crate

In early October the museum team set out from diverse origins (Scotland, Devon Germany and Australia), meeting up in the Falklands for the onward sea journey to South Georgia. Also setting out at the same time from another Georgia, Georgia USA, was a scale model of Shackleton’s ship Endurance that has been made and donated by Ken Greenwood. The delicate model, complete with glass case, was carefully packed and then shipped to Panama where it was loaded aboard the expedition cruise vessel National Geographic Explorer who delivered it to Grytviken on the last day of the month. With the ship at anchor, hearts skipped a beat as the substantial case was lowered into an inflatable Zodiak then driven to the jetty, lifted out on a forklift and moved into the biosecurity shed. One of the first jobs of November then will be unpack and check how well it has travelled. Fingers crossed.

With a week and a half from arrival on island to the first cruise ship visit, we were kept busy with the usual unpacking and biosecuring of cargo, replacing museum items that had been stored for the winter, putting out the signage around the whaling station and stocking the gift shop with all the lovely new lines.

We also had two new temporary exhibitions to install. The exhibition “Painting in the whaling stations of South Georgia” featuring works by our Artist in Residence Theo Crutchley-Mack makes quite an impact as you enter the Museum. These powerful, expressive, almost 3D works demand attention. The paintings and catalogues are for sale, and later in the season we will have a limited edition print of the sealing vessel Petrel and perhaps a printed copy of the artist’s sketchbook. Theo’s work resulting from his residency will also be exhibited at the Falkland Island Museum, and at several galleries and venues in the UK and he will be speaking and showing his works at the Scot Polar Research Institute (SPRI) in Cambridge, UK, as part of the November 10th Autumn Event being jointly hosted by the South Georgia Association and SPRI.. Watch his Facebook page for news [www.facebook.com/crutchleymack] 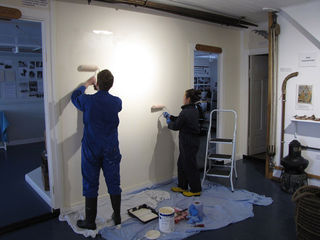 Finlay and Charlotte preparing to install the new exhibitions 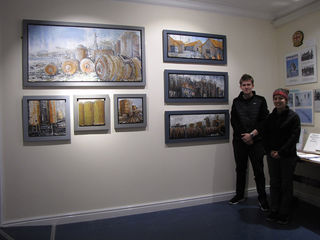 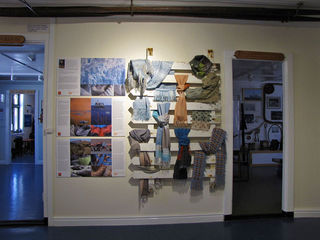 ‘Scarf stories from Antarctica’ is an exhibition of textiles inspired by the region by Alison Stattersfield. The eight featured scarves were woven by hand on an eight-shaft table loom using yarns such as silk, wool, alpaca, mohair, cotton, Tencel and monofilament. To accompany the exhibition a small number of scarves were manufactured by one of the UK’s foremost weavers Stephen Walters and Son Ltd in fine wools and cotton that are on sale in the Gift Shop. 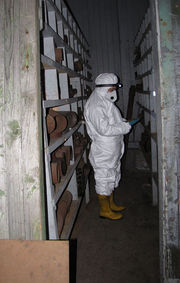 Last season’s Curator, Charlotte Yeung, was on the island a few weeks earlier than the rest of us. Indeed their ship had to wait for two days as the ice was too thick on the cove for it to be able to get in. She was accompanying a group of specialist cleaners removing historic dust from the Main Store. Her role, to oversee handling of the original whaling artefacts that crowd the shelves in the store, and to catalogue the many thousands of artefacts as we work with GSGSSI towards opening the building for visitors in the future. 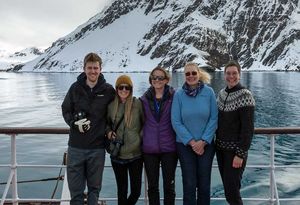 The 2018-19 museum team, Finlay, Dani, Laura, Sarah and Kerstin, aboard the Pharos SG arriving at the island

Museum Assistant Laura was thrilled that it was worth bringing her skis as the winter snow has stayed. Kerstin, returning for a second season, has been busy with her camera recording the elephant seal breeding season. Also back is Fundraising Assistant Dani; and this season’s Curator Finlay is getting used to having wildlife pretty much up to the doorstep of the staff bunkhouse! So once again the doors are open and everyone is welcome at the South Georgia Museum…