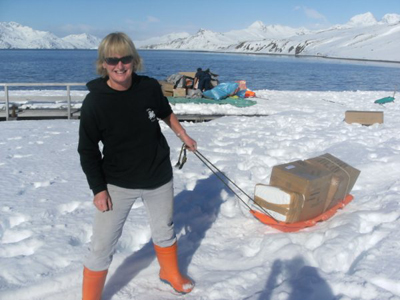 Welcome back to the South Georgia Museum Blog for another season. Returning to South Georgia now is like coming home and the anticipation of being back in a much loved environment was great. As to be expected, the journey down from the Falklands on Pharos SG was long and lumpy but they got us here in time for me to celebrate my birthday on the island. Having spent 3 months in northern Cyprus working on a marine turtle conservation and research project enjoying temperatures of over 40 degrees and wearing only a bikini, I am now having to come to grips with temperatures of 0 degrees and wearing thermals, down and insulated wellies! 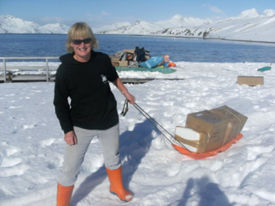 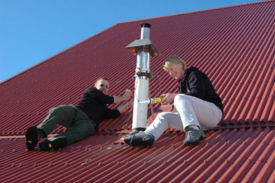 Tommy & Ainslie on the roof

Bridget and I were straight into work with the major undertaking of moving the mountain of incoming stock from KEP over to Grytviken. With the track round the cove still well covered in snow, it was a bit of a logistical nightmare but with willing boating crew from KEP we were able to use the jet boat to transport everything across the cove. The crew from Pharos SG provided the manpower pulling sledges laden with boxes from the Tijuca jetty to the museum. It was a fine effort form everyone involved and we were most grateful of the help.

Our first week has been spent bringing the museum back to life after its winter shutdown. It has survived the winter well with no snow damage or leaks found. Tommy from KEP technical services has been over to re-erect the chimney for the boiler but as usual the actual boiler is proving a little reluctant to do its job. Although we do have electric heaters, to stave off complete frost bite we are often dressed in woolly hats and layers of fleece jackets – and that’s inside!

Having faced a very fat rat in the middle of the night recently which bounced back to life after several severe beatings with a shovel, we are now back on our own crusade of rat eradication laying traps and bait stations around the cottage and museum.

Now begins the exciting task of dealing with the new stock – opening boxes, counting and recording and finally displaying in the shop. We are looking forward to the arrival of Elsa and Steve early October and then the arrival of the first cruise ship.

From a very snowy southern island, until next month

Since I received a bursary to visit South Georgia from the Arts Trust for Scotland in March 2008 I have checked this blog regularly, keeping up to date with the museum and getting clues to what it might be like living on an Antarctic Island. I am still finding it hard to believe that I am now here at King Edward Cove, working in Grytviken as the new museum assistant and adding my own update to the blog at the end of my first week.

As an artist I became interested in South Georgia through a project researching the history of an Edinburgh property, which was once the home of Ted Salvesen, who managed the Christian Salvesen and Co whaling company operating out of Leith, Edinburgh. Through my work and research I found out about Leith Harbour, South Georgia and my fascination with the Island and its whaling history grew from here. Over the last year my artwork has been inspired by the histories and images of this Antarctic Isle and I still cannot believe that for the next four and a half months I can call this amazing place home and experience life here firsthand.

After a long and epic journey, by plane from Brize Norton to the Falkland Islands, then with six rough and stormy days on the Fisheries Patrol Vessel ‘Pharos’ I arrived at King Edward Cove on Monday 7th of September to bright sunshine and blue skies over a snow covered landscape. The beauty of the island is more breathtaking than I could ever have imagined and each day just seems to get better and better. Everyday more wildlife arrives and as the snow melts traces of the landscape and the whaling station are slowly starting to appear. 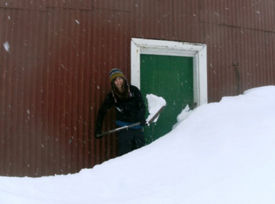 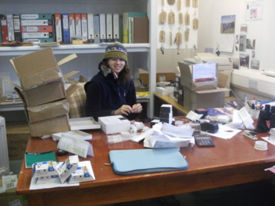 Plenty of layers are needed in the office!

My first week has been brilliant and I am settling into life here and enjoying every minute. Everyone has been so welcoming and I just know that come January I won’t want to leave. Ainslie and I have been busy opening up (and warming up!) the museum and transporting our new shop stock over the cove and through the snow by boat and sledge – luckily we had good weather and some game volunteers from the ‘Pharos’ to help. I have also had some time to get out and explore a little bit of the area with my first uphill skiing on Monday. The steep and exhausting climb up to the repeater was definitely worth it for the spectacular views from the top and the perfect conditions for the ski back down.

I didn’t know what to expect when I arrived here and so far it has been better than I ever could have imagined. The scenery, history and day to day life are all inspiring me to get started on some new research, artworks and drawings and I know that that the next four months are going to be a very productive and exciting time and an amazing experience.