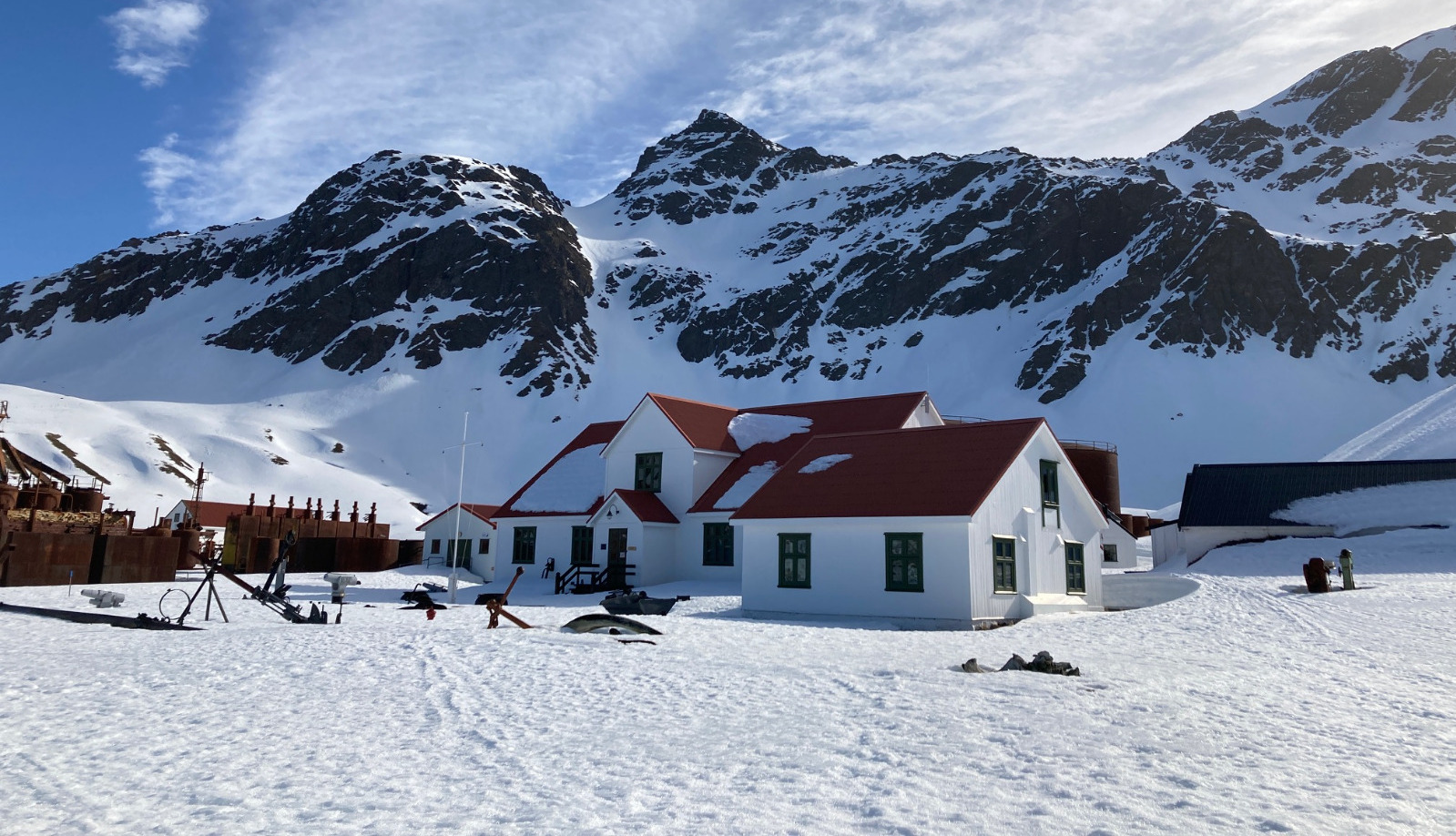 September 2022: An early start to the museum season!

Travelling to such a remote island involves a lot of planning in advance, and there’s a saying on Antarctic research stations – ‘all plans subject to change’. So, in summer this year we (Director, Deirdre and Curator, Jayne) made some travel arrangements for our journey to South Georgia, then we ripped them up and started again, then changed them one last time for good measure! Finally, we had a solid plan and tickets for travel in our hands, just days before we were due to fly. We were to travel to South Georgia very early in the season with the last of the winter snow and ice still sat on the ground.

With several big bags each, busting at the seams, we made our way to Brize Norton in Oxfordshire to board the RAF plane to Mount Pleasant in the Falkland Islands. After a long flight via Cape Verde, we arrived in Port Stanley well in time to catch our ship for the journey by sea to South Georgia. A few days later, as the sun set over Stanley, we cast off on the Pharos SG and slowly moved out of the harbour, through The Narrows and out to sea.

This is our third visit to the island and so stepping on the ship was easier this time. Both knowing what to expect from the adventure ahead, with fingers crossed for flat seas! The Pharos trip was very calm which, although good for the seasickness, meant that the view from the bridge was often gloomy, watching through sea fog and mist at endless greyness. The lack of wind also meant no birds to watch either. (The on-board biologist who was there to undertake bird monitoring had a rather slow crossing!)

Normally the museum team arrive in early to mid-October, by which time spring is in the air and the wildlife breeding season is in full swing. But this year we arrived to lots of snow and ice on the ground, having to wear spikes on our shoes to hold us up-right. The temperature is around zero degrees so the snow is slowly melting but freezing again at night, creating the ideal ice pans – if only we had ice skates!

We are currently living at King Edward Point in Discovery House. The house was built in 1925 for the Discovery Investigations, which were set up to monitor and establish wildlife and population sizes around the Southern Ocean. Today, the beach in front of Discovery House is home to a large group of elephant seals that have hauled out, and they will start giving birth to their pups in the next few weeks. They make for noisy neighbours but it’s like having Frozen Planet on your doorstep!

The whaling station of Grytviken, and the location of the museum, is a short walk away along a rough track, the only ‘road’ on the island. As commutes to work go, it must be one of the most beautiful – even when we are battling through the wind and snow!

Although our first ships don’t arrive until early next month, we’re already busy preparing the museum for our first visitors. From de-winterising the office and putting objects back on display, to stock-checking in the shop – there’s plenty to get on with!

As we look towards October, we are excited for the arrival of the rest of the museum team and our first ships of the season. For now though, we’re off to dig out the snow shoes again!