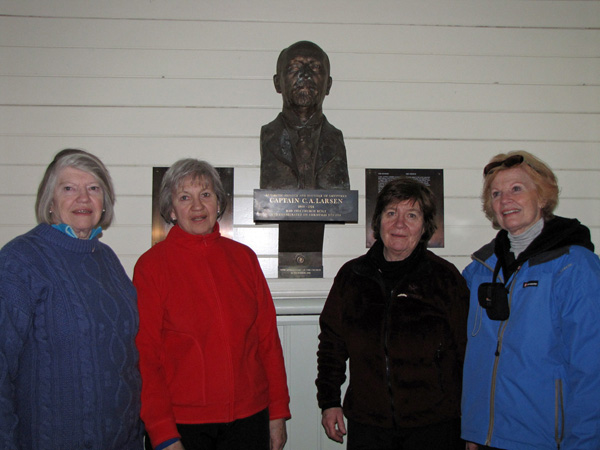 SGHT DIRECTOR SG SARAH LURCOCK ROUNDS UP THE 2011/12 SEASON WITH THE NEWS FROM MARCH. 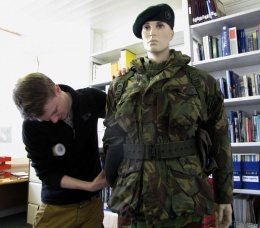 Having got various members of the Museum team to write the Museum blog throughout the summer, it finally falls to me to write as the season comes to an end. Only Hugh, part-time Handyman, and I have been left this past couple of weeks anyway as, with so few ships left, Sue and Henrik could catch a lift out with their old friend the ship Polar Pioneer. Only four cruise vessels visited in March but we also saw HMS Clyde and the crew of a longliner. 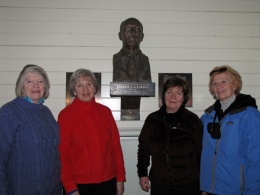 C.A Larsen’s granddaughters and a cousin (second right) pose with the bust of Larsen in the church.

We had some very special visitors aboard the Norwegian cruise ship Fram – three of CA Larsen’s granddaughters. They told us how their mother (who lived at Grytviken as a child when her father, who founded the whaling station at Grytviken was Station Manager) was responsible, with her sister, for setting light to the first Manager’s Villa. Apparently the children left their dolls leaning against the chimney pipe when called down to dinner and the dolls caught light. Everyone ran out of the house to avoid the fire but the children ran back in to find the dog. The Doctor ran back in to get the children and dog safely out. The South Georgia Museum is housed in the villa that was built to replace the one that burnt down.

Another VIP was Oscar Castillo, South Georgia Desk Officer at the Foreign and Commonwealth Office. He arrived on HMS Clyde and had lunch with us at the Museum to discuss tourism. The HMS Clyde visit was great fun. They all seemed to be enjoying the chance to explore the area. The “bish”, a shipboard Padre, held a well-attended service in the church on the Sunday, after which we hosted all to coffee in the staff room after. That afternoon there was a ship v shore football match. Despite having the talented Explosive Ordnance Disposal lads on the shore team, and a team of 13…lucky the opposition did not bother to count us…. And our own Henrik on the wing, the shore team were easily outgunned. Half time was spent picking burnet bobbles off those players foolhardy enough to dive onto the stony, boggy and burnet surface.

I enjoyed running the Museum alone for a couple of weeks, though perhaps not all that cleaning. But a highlight has been leading the Whaling Station Tours. These were introduced this summer and take up by the ships has increased as the season has gone on, with most ships now wanting a tour for their passengers. We generally meet them at the Cemetery, after they have toasted Shackleton and Wild. This is ideal as it is close to the wreck of the Louise, which is pretty much where the history of Grytviken starts. Louise was one of three vessels that arrived in 1904 with everything aboard to set up the first whaling station. Incredibly it was operating just a few weeks later. On the tours we tell people about the way the factory worked and about the lives of the men (and handful of women) who lived and worked here. I must say thanks to the volunteers, Paula, Jude and Steve, who came in to help run he shop so I could still offer the Whaling Station Tour when NG Explorer came through.

A big part of our efforts this summer have gone into fund raising for the Habitat Restoration Project. Giving talks aboard the cruise ships and encouraging uptake of the Sponsor a Hectare scheme. It is thrilling then to think that in a year’s time Grytviken will once again be buzzing with the sound of helicopters as Phase 2 of the baiting programme gets underway. Good news meanwhile is that monitoring on the Greene Peninsula, which was baited last year, has shown no sign of any surviving rats. Peanut butter impregnated plastic tags were laid out all over the peninsula a while ago. If rats were around they would try to eat the tags, leaving gnaw marks in the plastic. The tags were re-examined and there were no tooth marks. 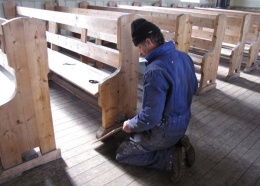 Maintenance work continued with Sue and Henrik making things brighter in the Museum by gloss painting the scuffed skirting boards. Hugh tackled a huge job mending the pews in the Church. As ever, what looked like a few pews needing a little work soon turned into a major project, but one that is good to have done in good time before the Church Centenary in a couple of years’ time. Hugh also had the cemetery looking very tidy by the end of the season, which is timely as it is the 30th anniversary of the war in 1982. Though we won’t be there, we expect the locals to hold a short commemoration in the cemetery at the grave of Felix Artuso on April 26th. 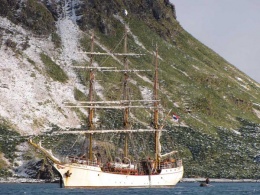 A great treat for Hugh and I was to be invited to join the tall ship Bark Europa for half a day. They were dropping off passengers at Maiviken to walk to Grytviken. So early one crisp snowy morning, in bright sunshine interspersed with snow showers, we enjoyed the walk across. We met the walkers on the beach amidst playful fur seal puppies and were taken aboard the magnificent ship in a wee Zodiac. 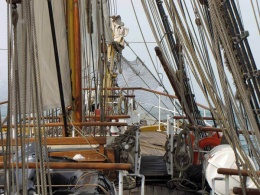 How do they know which rope to pull?

With snow continuing, and a cold southerly breeze, we were glad to get involved pulling on ropes to haul the Zodiak aboard and help set sail, and then were thrilled to find ourselves under sail in Cumberland Bay.
The creak of the vessel was about the only noise as we made a good few knots speed through the water. Looking along the decks there were so many ropes I wondered how the crew knew which one to pull on. I surprised myself with just how much I loved the experience, though I did not think long before turning down an offer to go aloft!

Then it was time to close down for the winter and start planning for next season. The shop had to have an end of season stocktake. Liz, the Shop Buyer, is already busy in the UK finding lovely new things for next year’s stock. There were inventories to be done and the heating to be turned off and water drained down to prevent freezing. Luckily the Power stays on, so I moved a few oil heaters around as a couple of locals will kindly open up for any visitors whilst we are all away. It can be several degrees below zero in the Museum in winter. In fact is can be pretty parky all year round. I have a list of shopping I want to get whilst I am in the UK, it includes thermal long johns, thermal wellies and a down jacket!

Look out for the next blog in October or November, once we are up and running again in time for next season.