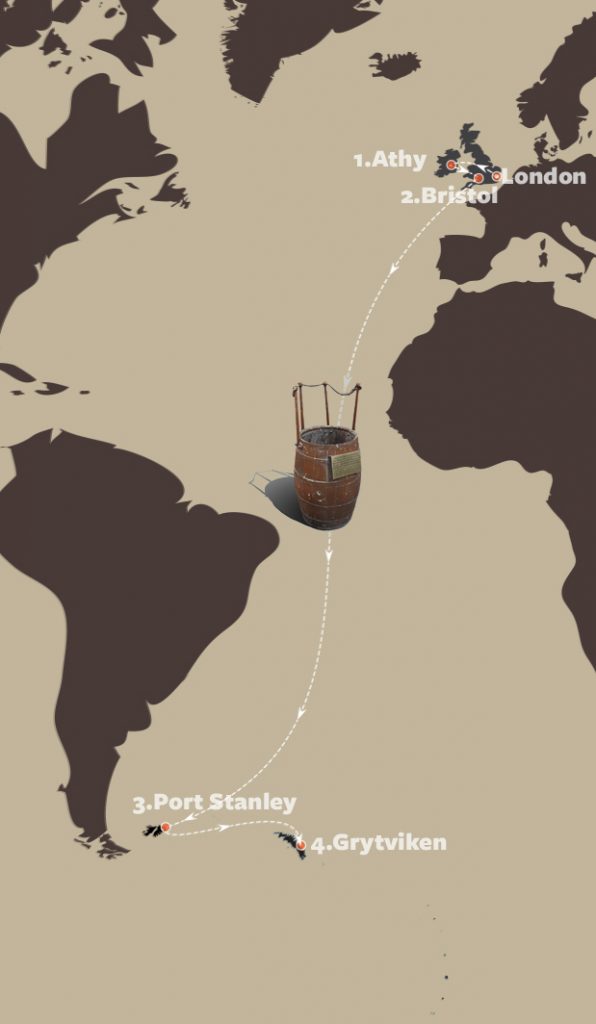 Follow the crows nest journey as it travels across the globe.

LONDON: All Hallows by the Tower church. Home to the Crows Nest, the starting and end point of the journey.

1 ATHY: Shackleton Museum, Athy. The crows nest will be transported by road and ferry from Athy to Bristol.

In 1921, Sir Ernest Shackleton made another voyage to the Antarctic on the Shackleton-Rowett Antarctic Expedition. More commonly known as the Quest Expedition, it was to be Shackleton’s fourth and final Antarctic expedition.

The ship Quest was launched in 1917 in Norway and originally named Foca I. She was a small, two-masted wooden schooner of 205 tons, purchased by Shackleton for the expedition and renamed Quest at the suggestion of Lady Shackleton. Built for Arctic waters, she had a 125-horsepower steam engine and a reinforced bow sheathed in steel but needed extensive refitting for the Antarctic. Modifications included adding a new crow’s nest, a lookout high on the front mast to aid navigation through the ice packs of the Weddell Sea.

This year, the crow’s is travelling back to South Georgia to feature in a very special exhibition, Shackleton’s’ Last Quest. The exhibition marks the centenary of the launch of the Quest voyage and the event that is considered the end of the heroic era of exploration, the death of Shackleton.

1. London, All Hallows by the Tower

Quest returned to the UK in September 1922. She was sold to a Norwegian fishing company and before heading back to sea, Shackleton’s original cabin on the deckhouse and the crow’s nest were removed. Quest survived World War II, working as a mine sweeper, but was eventually sunk by ice in 1962 off the coast of Labrador, whilst on a seal hunting expedition.

Both Shackleton’s cabin and the crow’s nest still survive today and are all that remain of the ship. The crow’s nest now resides permanently in the crypt of All Hallows by the Tower church.

All Hallows by the Tower is the oldest church in the City of London and was founded by the Abbey of Barking in 675AD, 300 years before the Tower of London. An arch from the Saxon church can still be seen today. In the crypt beneath is a second century Roman pavement, discovered in 1926, evidence of city life on this site for nearly two thousand years.

‘Tubby’ was the vicar of All Hallows, the Reverend Philip Clayton, nicknamed ‘Tubby’ whilst serving as chaplain on the Western Front during the World War I. He opened the Talbot House as a rest home for wounded and shellshocked soldiers. The Rev. Clayton would tour with the crow’s nest using it as an attraction to raise funds for the hospice.

The Shackleton Museum has a permanent exhibition devoted to the polar explorer Sir Ernest Shackleton. Highlights include an original sledge and harness from his Antarctic expeditions, a 15-foot model of Shackleton’s ship Endurance, plus an exhibition of unique Shackleton family photographs.