‘Apart from her white crow’s nest and exceptionally large bridge, there is little to distinguish the vessel… but the romance of her mission and the fame of her chief, Sir Ernest Shackleton, invested the Quest with a glory of her own.’

Quest was launched in 1917 in Norway and originally named Foca I. She was a small, two-masted wooden schooner of 205 tons, purchased by Shackleton for the expedition and renamed Quest at the suggestion of Lady Shackleton.

The ship was small, poorly fitted and reckoned exceedingly uncomfortable by those who sailed in her. She rolled significantly, making even cooking and eating extremely difficult. Built for Arctic waters, she had a 125-horsepower steam engine and a reinforced bow sheathed in steel but needed extensive refitting for the Antarctic pack-ice. Modifications included a new crow’s nest, an enclosed bridge and with eighteen men on board, the addition of an extra deckhouse was much needed.

The ship sailed with Kipling’s inspirational poem ‘If’ on a brass plate placed on the bridge, affirming Shackleton’s motivation and motto for life.

Equipment of the Quest

Shackleton was keen for his ship to utilise the latest technological equipment including the latest wireless equipment and an instrument for measuring a ship’s course called an odograph. Most radical was the plan to take a small Avro ‘baby’ sea plane. As Shackleton stated in his official proposal, a plane was ‘a powerful help to the modern oceanographic expedition’. However, a change of Quest’s route meant that vital parts were never retrieved from storage in Cape Town and the aircraft was never deployed.

Australian aviator and Quest crew member, Hubert Wilkins, later became one of the first men to carry out aerial explorations of Antarctica in 1928.

There was much public interest in the equipment and living arrangements of the crew, with many newspaper reports commenting on their kit and food provisions, including rumours of taking edible candles.

‘The eatables for the journey include such things as about three tons of flour, two or three tons of biscuits, and large quantities of sugar and tea.’    The Scotsman August 1921

‘Sir Ernest and his party will use no other soap than Pears on the voyage. Indeed every toilet article on the Quest has been supplied by Pears.’ The Graphic, September 24, 1921

‘Her berths for the most part are fitted with spring mattresses, and electric light is installed throughout. The kitchen —the most compact little place imaginable—and the cook’s cabin back on to one another.’  The Scotsman August 1921

Quest was built as a sealer in Norway in 1917, bought for Shackleton’s last Antarctic expedition and taken to Southampton for refitting to prepare for the expedition. A large new deckhouse was added including several cabins; one of these was allocated as Shackleton’s. A second addition was a lookout barrel or crow’s nest. Constructed like a normal wooden barrel it was secured at the top of the main mast by two iron hoops. This was the highest point on the ship and afforded the best view to spot icebergs and hazards when in polar seas. Shackleton was keen to try new technologies and had the crow’s nest fitted with an electric heater.

After the expedition, Quest was sold to a Norwegian ship-owner, returned to Norway for a re-fit in 1924 and used once again for sealing. The Quest crow’s nest and deckhouse were removed and taken ashore. The crow’s nest became the property of Reverend Philip Clayton of All Hallows by the Tower where it remains today.

The Quest crow’s nest is being loaned to the South Georgia Museum to be on display as part of the ‘Shackleton’s Last Quest’ exhibition on the island of South Georgia. Here you can explore the object.
(The 3D model may take a few moments to load.)

Next Chapter: The Crew

Print of a watercolour by Charles Dixon.  Shackleton was elected to the Royal Yacht Squadron, an honour that entitled Quest to fly the white ensign.

This model of the schooner-rigged steamship Quest was made by crewmember James Dell.  Model 150mm (width), 545mm (height), 925mm (length) 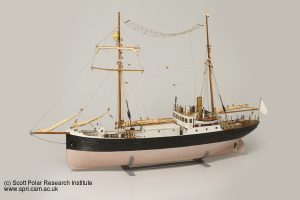 A brass clock, given to Shackleton at the outset of the Quest Expedition and sat in his cabin. It is engraved ‘To the Boss from the Boys’. 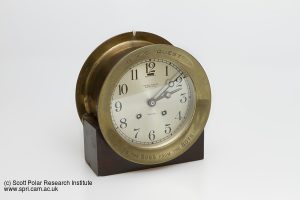 The deck plan and Equipment’s of the Quest.

Drawn by W. B. Robinson and for the Illustrated London News. Published 17 September 1921. It is entitled ‘Southward Ho! A Little Ship on a 30,000 Mile Voyage to Antarctic Seas’. The diagram shows the layout of spaces and stores within Quest.

The barrel bears the inscription ‘brought here by Tubby in Quest of Siller for Talbot House.’

The barrel bears the inscription ‘brought here by Tubby in Quest of Siller for Talbot House.’
‘Tubby’ was the vicar of All Hallows by the Tower Church, London. Reverend Philip Clayton gained his nicknamed whilst serving as chaplain on the Western Front during World War I. He opened Talbot House as a rest home for wounded and shell-shocked soldiers. “Siller” was an Old English name for money, being a Scottish variant of silver. Reverend Tubby Clayton would tour with the crow’s nest using it as an attraction to raise funds for his Talbot hospice. Following the armistice, Clayton opened further Talbot Houses in London, Manchester, and Southampton.

At the back of All Hallows church today, a narrow staircase leads down into the crypt. An original Roman road is still here, perfectly preserved. Walking past the church register, opened to the day John Quincy Adams was married here, you take a narrow subterranean passage to a small underground chapel. The altar is made of stone, taken from Richard I’s castle Atlit, built during the crusades by the Knights Templar. Around the corner amidst such mysterious surroundings lies the crow’s nest from the Quest. Hardly known about or visited, along with the rescued cabin it is all that remains of the ship on which Sir Ernest Shackleton made his final voyage. 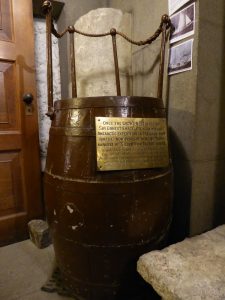 On loan from All Hallows by the Tower.

Launch Object on All Hallows By The Tower Website